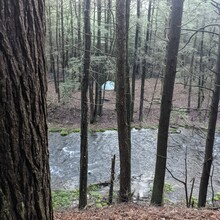 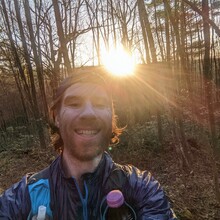 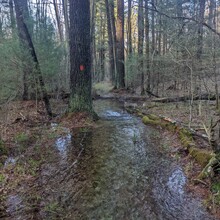 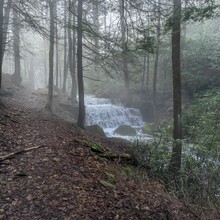 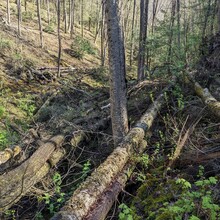 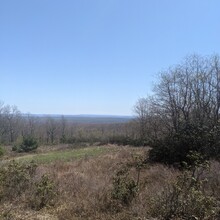 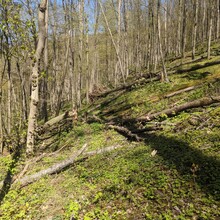 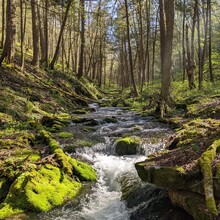 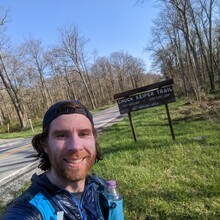 As I've mentioned in my previous FKT trip reports, I'm on a quest to complete all 18 of the Pennsylvania State Forest backpacking trails.  The Chuck Keiper Trail marked my 15th trail, 944 miles out of 1183 total miles.  I had originally planned my attempt the previous day but a tropical depression was spiraling over Pennsylvania, dumping 3" of rain over 48 hours.  I knew the trail would be wet the following day, but the weather forecast was perfect so I decided to go for it.  I camped overnight along Big Run, about 1.5 miles East of De Haas Road.  The only reason I chose this starting point was because the author of Mid Atlantic Hikes described this as "perhaps the best campsite in the entire CKT loop".

I started my attempt at 6:22am, at a large tree in the center of the trail directly across the creek from my campsite.  I decided to complete the trail in a figure 8 because the connector trail is blazed orange and considered part of the CKT.  I did not include the Cranberry Swamp Trail because it is blazed yellow and a side trail.  I hiked the West loop first, clockwise and the East loop counter clockwise.  Overall, it was a rather uneventful run.  I encountered two groups of people over the 53 miles, one group of Turkey hunters who were camped along Second Fork and a group of backpackers who I passed along the connector trail.  There were more stream crossings than I could count and every one required a knee/thigh high ford.  In the summer, I'm sure you could rock hop without getting your feet wet.  Thus, I had soaking wet feet for the entire 14 hours.  Eddy Lick Run was absolutely beautiful and a perfect way to start the day.  The 100 year old Splash Dam was impressive.  Yost Run was also breathtaking but equally brutal.  The sidehill trail made any type of running challenging and the tangled mess of blowdowns (pictured) significantly slowed my pace. Once I reached the plateau at the top of Fish Dam, the running was quite level.  The connector trail was a bit swampy for about 200 yards but well worth repeating twice.  Again, easy terrain to Shoemaker Ridge Road where you encounter a series of steep ups and downs.  Sled Rd Hollow Run was quite pretty.  I had encountered a bear here last year and was hoping to run into another, but no such luck.  I then began my descent toward Boggs Run.  I had also hiked this section last year as part of my training for the Mid State Trail FKT and knew what I was getting into.  This section of trail is extremely rugged, steep, sidehill with many blowdowns.  Somehow it seemed more difficult than the previous year.  I was quite relieved once this section was over.  I began my descent back to Route 144 and then up Drake Hollow.  To my relief, the first half of this trail was an old logging road with easy tread.  I reached the top of the plateau again and knew this was the home stretch.  I re-traced my steps along the connector trail, made a right on the West Loop of the CKT and pushed as hard as I could, hoping to go sub-14 hours.  The last 6 miles were my fastest consecutive average mile pace for the entire FKT.  About 3 miles from the finish I was running down an old logging road and realized I hadn't seen a blaze for about 200 yards (the trail is blazed extremely well, every 25-50 yards or so).  I checked my GPS which showed I was still on the trail, but my gut told me I had missed a turn.  I stopped for about a minute to assess and decided to run back uphill to find the last blaze.  At that point, I realized the CKT turned off the logging road, back into the woods.  I had lost about 4 minutes due to this missed turn.  I continued to race downhill as fast as I was capable of, pushing through mountain laurel, branches and small blowdowns.  I saw the valley of Big Run coming in off to my right and knew I was approaching the end.  I ran past the big tree I had started at and stopped my watch, 14 hours 2 minutes 25 seconds.

Admittedly, I'm not the fastest trail runner.  I'm entirely too risk averse to bomb down a mountain fearing a broken collar bone or smashing head first into a tree.  All of my previous FKT's have been strictly hiking with minimal spurts of jogging.  My goal was a sub-15 minute pace.  Unfortunately the blowdowns, frequent sidehill, and raging streams (sometimes down the middle of the trail) slowed down my pace.  That said, I was quite pleased with my first attempt at running an FKT.  I hobbled down to my campsite, got my feet wet one last time crossing back over Big Run,  sat in my chair resting and listening to the Owls hoot.