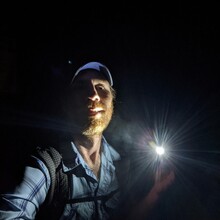 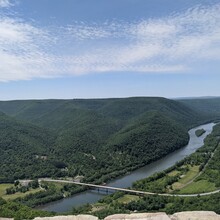 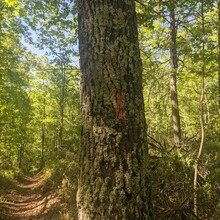 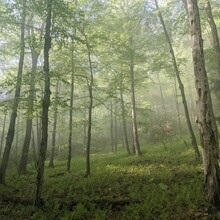 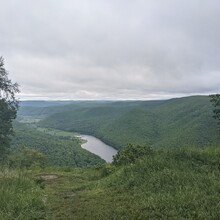 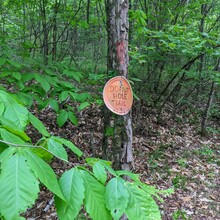 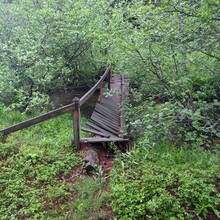 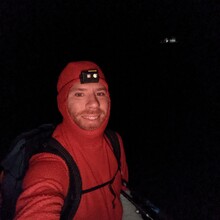 This FKT was part of my training for an upcoming FKT attempt of the Mid State Trail in Pennsylvania in two weeks.  I wanted to get in a full 4 days of training so I decided to start at the Eastern trailhead in Farrandsville and hike to the Western trailhead in Jericho, where I would start the FKT.  The entire trip was 170 miles.  If you would like the tracks for day 1 and 2, please leave a message and I will share.  As this was a training trip I utilized my full 22lb pack that I'll be using for the Mid State Trail FKT.  Unfortunately my Mid State FKT may need to be postponed as I suffered a subungual hematoma on my left big toe on the last day of this trip.  The hematoma was so severe I ended up going to the Temple Hospital for foot surgery in Philadelphia 3 days after I completed the FKT and they determined the nail needed to be surgically removed.  Although healing time is rather quick, the nail bed was pretty severely damaged and it may not be fully healed in time.

There are some critical navigation points I would like to highlight prior to the trip report.  For navigation, I was using Gaia GPS on my phone with the Sproul State Forest Public Use Map as a custom source layer.  I've used this combination extensively on other trails in PA (Loyalsock, Bucktail Path, Black Forest Trail, etc.) and it has always been 100% accurate.  However, I'm not sure whether it's due to re-routes or the map itself isn't accurate but there were many, many times when I was following the orange blazes but my GPS was showing me 1/2 mile to many miles off the trail.  In addition, the official map provided by the State Forest shows (heading Eastbound) the Donut Hole trail intersecting the Susquehannock Trail at Porter branch, the trails merge for about a mile and then the Donut Hole trail makes a right away from the STS.  THIS IS NOT  ACCURATE.  The trail has been rerouted and the STS and Donut Hole trail follow the same trail from Porter Branch 8.5 miles to Fork Hill Road where the Donut Hole trail makes a right. The 2nd major discrepancy is at Hyner Run State Park.  The map shows the trail turning left when it reaches the park and heading North East of the park through the forest.  The trail now follows the road to the park entrance where it makes a left on Hyner Mountain Road, follows the road for 3/4 of a mile and then makes a right into the woods.  There are no blazes on the road and no sign to indicate the re-route.  The road itself is quite dangerous as there's a guardrail, blind curves and zero shoulder on either side of the road.  Everywhere I have read online indicates the trail is 89.7 miles.  However, my GPS track shows it's actually 97 miles if you take the high water route, which adds 0.8 of a mile.

Day 1: Began hiking from Eastern trailhead at 10am.  Followed the Donut Hole trail for ~10 miles until it drops down to the West Branch of the Susquehanna river.  Followed the river until a reached route 120, took the bridge over the river, up the Jack Paulhamus / Garby Trail, connected to Chuck Keiper trail and spent the night.  Rain started at 1:30pm, temperature was in the mid-40's.  Did not end until 11am the next day.  I was soaked and freezing for 24 hours straight. 28.7 miles

Day 2: Started on the Chuck Keiper trail, right on a forest road, down to Renovo, walked through the town, turned North on Route 144, followed various forest roads, old logging roads and finally finished on the Donut Hole Trail where I camped just inside the State Forest Boundary. 37.3 miles.

FKT Day 1 - Start of the FKT: Woke up at 3:30am, packed up camp and started walking to the Western terminus of the Donut Hole Trail.  The trailhead ended up being 0.8 miles from camp at the intersection of Jericho Road and Route 144.  Started my attempt at 4:44am.  Hiking was rather uneventful for quite a ways.  The section along Savage Mountain was a bit difficult to follow as the blazes.  We received an inch of rain the previous day so I decided to take the high water route over Kettle Creek.  Only adds about 1 mile and is a road walk.  The next section of trail is relatively "flat" and quite remote, not really passing any roads until you reach route 144.  Back into the forest, very nice hiking until I came to Porter Branch and the Susquehannock trail.  This is a beutiful area, extremely remote that follows meadows and beaver dams along Porter Branch.  As I mentioned previously, I reached the point where the Donut Hole Trail showed to make a right off the STS at 8pm, knowing sunset was at 8:40pm.  However, there was no trail or blazes to be found.  I had hiked the STS the previous year and remembered a sign somewhere in this section.  I couldn't remember for certain but thought the sign indicated the turn for the DHT so I jogged ahead to see if I was correct.  Unfortunately I found the sign and it simply said it was the intersection with Osborne Branch.  I second guessed myself, not wanting to give up on the FKT and ran ALL the way back to where the map indicated the DHT turn.  After an hour of unsuccessful searching I finally decided to give up and hike the STS as it eventually reunites with the DHT.  Two hours later I reached that point and as I had hoped, there was absolutely no trail and confirmed that section of the DHT no longer exists.  I decided to push on to Left Branch of Young Women's Creek where I camped at a site right next to Ted's truss.  Reached camp at 11:15pm. asleep by 12am. I was extremely frustrated as I lost about 90 minutes total searching for trails that were on the map but didn't exist.

FKT Day 2: Alarm at 3:30am, one snooze, packed up and left camp at 4:20am.  Night Hiked for about an hour until the sun began to rise while walking on Fork Hill Road.  I was moving quite slow as the initial hike out of camp was ~800' and the trail down Bull run was extremely rugged.  This is also a re-route from the East side of the run to the west side.  Cougar Run was absolutely beautiful.  Hiked out of Cougar Run onto a plateau with a few more ups and downs, then easy hiking down to Hyner Run State Park.  Again, as I mentioned above, I spent about 45 minutes wandering around the park until I finally discovered the trail was re-routed to Hyner Mountain Road.  Began the arduous climb up to Hyner View State park.  An incredible view, although quite busy with people enjoying the view after driving to the top.  Always a bit of an adjustment to be surrounded by a ton of people after wandering around the forest alone, with nothing but my own thoughts for 4 days.  Admired the view myself for about 90 seconds, took a few pictures for my wife to show her where I had come from and where I was going, then began the descent to Johnson Run.  I believe somewhere along this section is where my toes began to "sting".  It was a sharp pain if I would kick a rock or root, difficult to describe.  I've done many 35-48 mile hikes but never experiences this sensation.  Reached a pipeline swath at the top of the climb out of Johnson Run and began a very annoying, in my opinion pointless 3 mile back and forth section.  You follow the trail South West for 1 mile before the trail doubles back and heads North East for 1 mile.  When you get to the next turn South West there's actually a 500 foot "shortcut" trail that connects back to the DHT you passed 2 miles prior.  Descend to very pretty Ritchie run, steep climb out of the hollow up to a plateau and very easy old grassy logging road.  Reached the West Branch of the Susquehanna where I had left the DHT 3 days prior.  Road hike up to Oak Ridge where the sun began to set.  Descended to Dark Hollow and then up to another plateau.  The map showed the trail was a straight shot across the plateau and I was excited that I was on the easy home stretch.  However, the blazes zig zagged up and down various side hollows and the blazes and trail were extremely faint, difficult to see by headlamp.  In addition, I kept kicking logs, roots and rocks with my left foot and each time, experienced an excruciating pain in my big toe.  I was so close to the end I decided to push on.  This resulted in very slow progress during this section, about 2mph.  I wasn't able to use my GPS to navigate because the trail was a full 1/2 mile away from where the map indicated and started to become concerned I'd completely lose the trail with only about 4 miles to go.  I finally reached Carrier Road and began an easy descent down State Game Lands 89.  I jogged off and on for about a mile of the final 4 miles, 1400' descent to the Eastern Trailhead where I had started the trip, reaching the terminus at 12:44am.  I pulled off my sock to assess my big toe and discovered it was completely purple with the nail raised off the nail bed and quite loose.  A very obvious, very gross subungal hematoma.  I decided to deal with it after I got home as I was delirious from lack of sleep the previous three nights and hiking 170 miles over 4 days . I took about 30 minutes to exhale from the adventure, calm the chatter in my head, climbed into my car and passed out for 90 minutes.  I woke up at 3:10am and began the drive back to Philly as my wife needed the car to drive to work at 7am.  Looking forward to the next adventure!