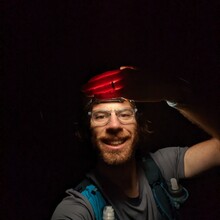 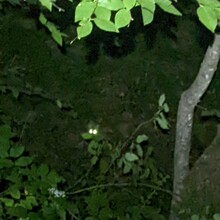 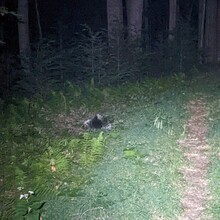 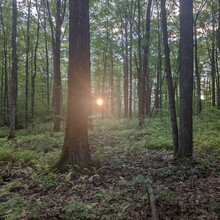 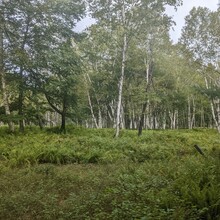 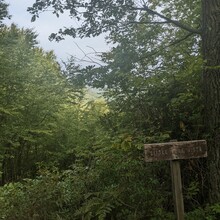 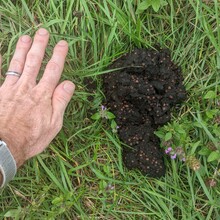 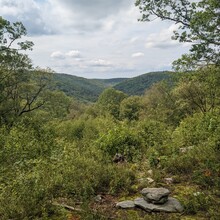 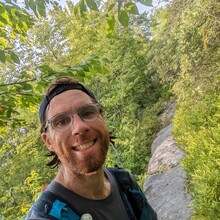 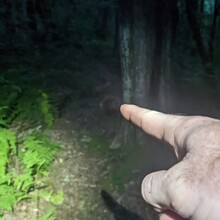 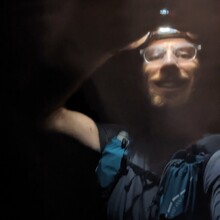 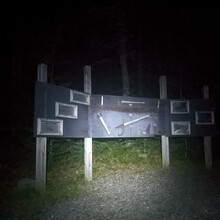 As I’ve mentioned in my other FKT trip reports, this was part of my quest to complete all 18 of Pennsylvania’s State Forest hiking trails.  This crossed 15 off my list, only 3 to go!   started my Quehanna FKT by staying at cabin 12 in Parker Dam State Park with my family.  I woke up at 1:50am and decided it was time to get ready.  I walked the half mile to the trailhead and began my run at 2:42am.  I headed in clockwise direction.  The first mile of the trail is a paved road onto a dirt road.  I made the turn into the woods and not more than 5 steps into the forest I was mid-stride and noticed a timber rattler below me, right where I was going to land.  I shifted my weight in the air and landed about 2 feet past the snake.  It was a neonate, only about a foot long.  Admittedly, this threw me off for the remainder of my night hiking – I was constantly on the lookout for rattlers.  Luckily, this was the only rattler I saw the entire day.  Around 5am, mile 9 I looked to my left about 75’ below me and saw two glowing eyes peering back.  I turned my headlamp on its highest setting and immediately recognized it was a very large bobcat, the size of a small dog.  I shouted a few times to sound intimidating and kept walking.  About 200 yards later I then saw what I assume was its kitten.  The remainder of the night hiking was uneventful.  The sun began to rise as I approached Marion Brooks Natural area and ascended to the top of the plateau.  The sun was beautiful as it lit up the forest.  I soon descended into Porcupine Draft where I was expecting to encounter blowdowns and stinging nettle from someone who hiked the trail a few weeks back.  The blowdowns extending for about 15 miles, all the way to Old Sinnemahoning Trail.  The stinging nettles and briars in all of the drafts were absolutely agonizing.  The first few “stings” are never that bad, but they seem to build up and become an unbearable itchiness.  I finally decided to pull out my rain kilt and hold it in front of my legs to avoid most of the stings.  My legs and thighs were trashed by the end of the FKT.  Sanders draft was quite picturesque with the rhododendron tunnels and babbling brook.  Overall, the rest of the run was also uneventful as I went up and down drafts.  I crossed Mosquito creek and began my final large ascent of the trail.  Just as the sun was setting, I was running at a good clip and ran into a black bear who was grazing in an open field.  It quickly headed off in the other direction.  The sun set and my pace began to slow again.  I’d run for a bit, then walk a few hundred yards.  I felt strong but I was experiencing pretty bad chaffing on my inner thighs that only allowed me to run for about a half mile before I’d have to walk for a ¼ mile.  I ran through a few campsites and said hello to the backpackers.  They were obviously a bit surprised to see someone running at 9pm at night.  Lots of animal encounters on this run (Animal Count:  1 rattler, 2 bobcats, 4 porcupines, a rafter of turkeys, more deer than I could count, more ruffed grouse than I could count, 1 bear), but overall a pretty straightforward FKT.  I finished at the trailhead in Parker Dam state park and walked the ½ mile back to the cabin where my wife was waiting, and daughters were asleep.  It was nice to sleep in a bed for the first time after a FKT, although I didn’t get much rest.    As the previous FKT holder, Gary Lampman mentioned the trail has some extremely runnable sections. Someone can definitely set a very fast pace on this route.  I carried all of my food and gear from start to finish and refilled water at natural sources.  My nutrition consisted of 2 MetRx meal replacement bars, a ziplock bag of Peanut Butter M&M’s, 2 bags of Roctane powder (500 calories each), 2 bags of maltodextrin mixed with Gatorade powder (600 calories each), 2 bags of Gatorade Endurance powder (600 calories each).  This is an absolutely beautiful trail.  I highly recommend you get out there and enjoy it!