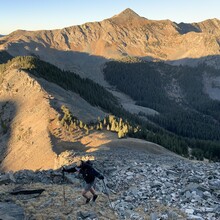 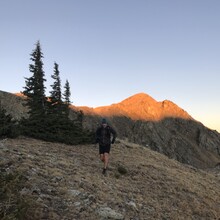 Three weeks after Taylor Pardue, Peter Gilroy, and I failed just short of completing this route, Peter and I made a second attempt on October 17.  We started at the Canoncito Trailhead near Arroyo Seco about 4:12 a.m. and watched the sun rise from Villacitos Mountain.  Peter developed a persistent pain in his leg around Wheeler Peak, after completing the most difficult portion of the route.  He ultimately decided to drop from the attempt, taking the Bull of the Woods Trail down to Taos Ski Valley.  Due to the dry conditions, we had to rely on a cache of water (and Coke and cookies!) we placed at Bull of the Woods Meadow the day before.

It's hard.  It's epic.  And I'd say this route is an instant New Mexico classic.