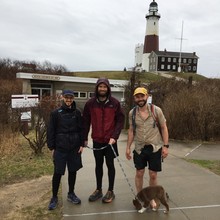 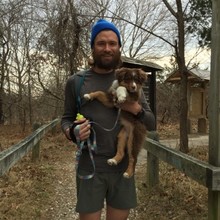 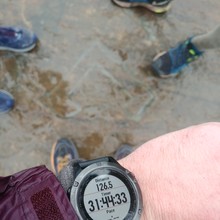 I completed a supported run of Paumanok Path in 31 hours and 44 minutes. I was primarily supported by my wife Jamie (and dog Beatrix) and was joined periodically by my friends Tom and Andy for pacing/encouragement/positivity/entertainment. Jamie and B dropped me off in Rocky Point at 9:29 AM on March 30th, and soon after Tom met me on the trail around 5 miles in, leaving me his spot tracker for everyone to follow future progress. Jamie and B waited at Middle Country Road (mile ~8) for a brief stop to refill on water and snacks.
The remainder of the day was organized similarly, Jamie and B met up again before (16) and after (26) Manorville Hills. Tom joined me for a few miles of trail before Jamie met us again at Pleasure Drive (34) and West Landing (43). Jamie and Tom met at Sebonac (53) and Andy left my overnight bag when Tom was picked up at N. Sea Drive (60). The next morning Andy and Tom joined at Three Mile Harbor (92) and ran the rest of the trail with me. Jamie and B met up again at Cranberry Hole (99) Napeague Harbor (104) and Montauk (115) for final resupply points, and we finished 125 miles at 5:13 pm on March 31st.
This was my fifth time completing the length of the trail, but my third time attempting to run the whole path. After bailing at mile 100 on the last attempt (see Tom Dee self supported FKT), I felt being self-supported was a big added challenge to setting a new overall FKT, so I decided to plan out this trip. I know there is still a lot of time to be taken off this FKT, and I hope this motivates some new people to obsess over this beautiful and bizarre trail.

I used the Garmin ultratrac feature to save battery life, and at that it was effective, but at the cost of significantly decreased quality of the gps track. I also took two small wrong turns around mile 75 and mile 77, and had to bypass a flooded stretch of trail at Upland Road around mile 115. In all cases it added more distance and time, but otherwise the trail was followed exactly as it is currently marked, including some knee deep water crossings around Oyster Pond.

I chose Montauk Point as the end. There are large rocks in a jetty surrounding the lighthouse, and at the easternmost point one rock is engraved with a large east-facing arrow pointing into the ocean. In previous attempts the finish was never clearly defined, and there are no consistent blazes after leaving the bluff trail, so I feel that this is an appropriate finish.

The trail has already (1 month later) had a small route change in Napeague, and is waiting for approval for another near Three Mile Harbor. Over the last 20 years the route has been constantly refined and improved as new preserve land is acquired, but all future changes should be similarly minor.

I was amused that I unintentionally started this run 5 minutes after this years's Barkley Marathon, and it felt great to be running through the night when I knew many others were experiencing similar challenges and delusions on a classic race. It was also interesting to learn later that the 13 Peaks Challenge FKT was set on the same day, yet at the time of writing this (May) has already been broken, twice.

I am very happy to hold this FKT for the time being, and was always impressed that Byron Lane ran the trail at its inception nearly 20 years ago, but nobody really attempted it since. Given the beautiful scenery, challenging hilly terrain, ease of accessibility and proximity to New York City, I am very surprised this trail does not receive more attention. Given the recently expanded interest in ultrarunning in general, and FKTs in specific, I don't expect this to be overlooked much longer, and I will gladly help anyone else willing to try hiking, backpacking, or running the path.