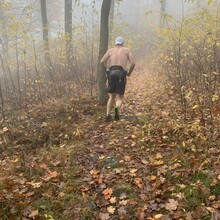 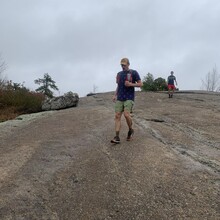 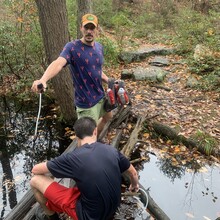 Weather at start: 59 degrees, over cast with lite rain at the start.

Began at the trailhead nearest Jones Point on Route 9W at the Eastern Terminus of the trail. Aaron, Nic and I began at 0733 with the climb up Dunderberg Mountain quickly followed by Bald Mount. Trails were covered in wet rocks and leaves with a continuing lite rain which made for slick conditions.

The Timp summit was the last named peak before having to cross the Pallisades Parkway which had heavy traffic and caused delays in crossing. The gap in between  The Time and Pallisades traversed a small hill with West Mount to the North although it could barely be seen with the heavy fog.

After Crossing the Pallisades we gained Black Mountain summit. The Appalachian Trial also is coalligned here. Next were Fingerboard Mtn, Hogencamp Mtn and Tom Jones Mtn. At this point we each began to finish what water we had left. The following miles left us on a search for water and we eventually filtered stagnant water to keep us going. We later found a slightly better source to filter more water but these stops added considerably to our elapsed time.

As we summited Parker Ash Mountain the weather broke and sun was finally shining. Our feet began to dry out and we kept on to Black Ash Mountain, the last named summit on this traverse. The remaining miles were uneventful although we all again ran out of water and Nic began to feel the effect the most. We eventually exited the woods and hit the final section of blacktop which completed this traverse.

General trail conditions for the route slowed travel considerably with wet leaves covering the rocks and presenting additional risk of taking a spill.

Aaron, Nic and I began and finished the route together

Nice run! I think I crossed paths with you early in your run, maybe somewhere between the Timp and West Mountain, when I was doing the 5 Sisters route. Conditions were super slippery and slow out there--strong work!

Thanks! See you hit an FKT this weekend as well! Awesome!