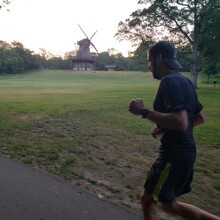 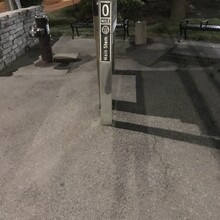 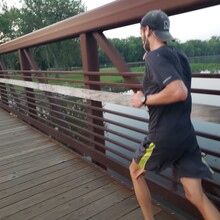 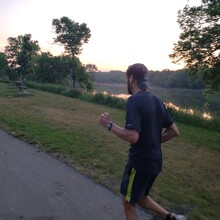 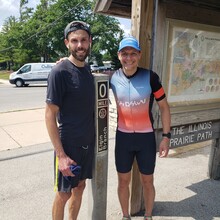 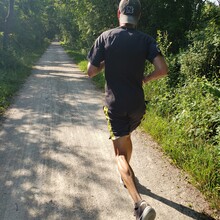 It's been a hot and humid week, but this was the most workable day in the near future and so I started just prior to 3am to get as many cooler hours as possible out on the trail. My good friend Brian McCollum joined me shortly afterward on his bike to be my support for the loop. His help with water and road crossings, words of encouragement, and silent presence were invaluable. (Thank you, Brian!) We carried water from the start but had previously dropped several bottles along the way to pick up and also used fountains to refill in Lombard and Glen Ellyn. The hours heading to the Fox River were in the dark—fun to run by the light of the headlamps. The sun started coming up while we were heading north along the river. Beautiful. The section along the Fox goes back and forth from feeling urban to rural. We saw dozens of groups of carp swilling on the surface looking like ancient sea creatures. Some of the best hills come in St. Charles and Elgin. As we made the turn south on the Prairie Path things were heating up, but portions of this section are in the shade and Wayne and the Timber Ridge Forest Preserve are two of my favorite parts of the whole loop. By the time we got on the Great Western heading east, shade was scarce, the temperature was creeping, and there were busier road crossings. These factors (alongside the fact that we were 45+ miles into the run) made it feel arduous. At mile 52, I began a cycle of walking for a quarter mile to take in fluids and get my heart rate down followed by two miles of running. Making the final turn west on the Prairie Path brought some emotional relief, and we eventually made it back to the 0 mile marker! Despite the heat, we saw regular bikers, walkers, and runners on all the stretches of trail. Thankful for the day and trying hard things.