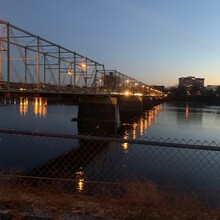 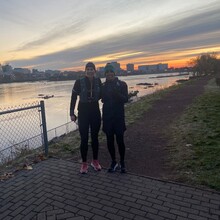 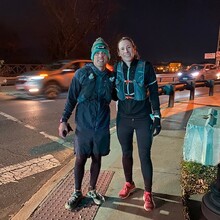 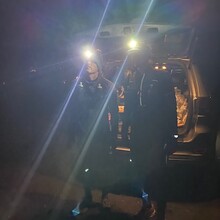 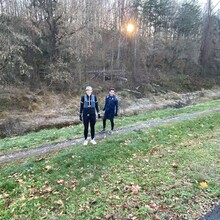 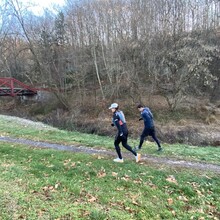 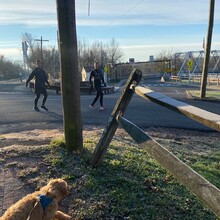 Our mixed gender FKT effort started at 6:40 am in Morrisville, PA. We started at the base of the Calhoun St. Bridge which is the southern-most point on the FKT Route. When we were planning the route we decided we wanted to run the route as basically a 50k out and a 50k back. It was somewhere around 30 degrees when we started and although the pedestrian had a slight layer of ice that that was beginning to break apart, we were greeted with a pretty awesome view of the sun rise as we headed into Trenton. After crossing the bridge and turning onto State St, we picked up the trail and fell into a really nice rhythm.

For the first 8 miles we hovered right around 9 minute pace. Erica and I were talking about the day and the plan we had for aid stations. The first 8 miles of the trail from Calhoun St. to Washington Crossing look a little different then the rest of the route. One of the coolest things about this route is the way that it connects the towns along the river. It takes 4-5 miles to work your way through Trenton, West Trenton and Ewing before you go under the Scudder Falls Bridge. These first handful miles look very different than the majority of the miles we experienced later on.

We rolled for another 5-6 miles running pretty consistently around 9:30 pace, again still chatting and talking about the day until our next aid station stop between 13-14 miles in. We stopped roughly 2 miles before we hit downtown Lambertville since we were fairly familiar with Lambertville and knew that parking/getting aid by the Lambertville/New Hope bridge may be a bit difficult. At this point it was around 8am. Still cold but at least the sun was shining!

After getting some aid and rolling through Lambertville we hit our first bump in the road along the journey. Just north of Lambertville there was a bridge that was fully out. We did check whatever online sources we could find ahead of time but we must have missed this bridge being out. We turned around and luckily we were able to quickly hop on the road that runs parallel to the trail. You'll see on our GPS route that we were able to get onto N. Main st (which was a little sketchy since it was a two lane highway) before hopping onto river rd and making our way back to the trail. It's hard to say exactly how much distance this added but based on or GPS data and the data of others who have ran the route it seems like it added somewhere around a half mile or so.

Once we got back on the trail we were rolling once again until we got to Stockton, NJ for our next aid station stop. We were just about 20 miles in and still feeling really good. One of the nice things about the cold was that we were able to really manage our hydration and fueling as opposed to feeling like your chasing the fueling/hydration the whole time. We spent another 5-6 minutes here and we were off.

We were both still feeling really good for our next 4-5 miles again still running sub 10 min pace. Going through Stockton feels like you're entering a totally different part of the state. There was what appeared to snow/frost still on the ground and we very rarely saw other people or even passing cars. I wouldn't call the trail remote at all but we definitely were getting into the more rural parts of the state. It's really to travel on your feet through these different landscapes. Probably one of my favorite parts about this effort.

We stopped for aid in between mile 24 and 25 where we probably spent about 10 minutes. This was our longest aid stop yet and this became the norm for the rest of the journey. We fueled up and got back to running knowing that the next time we stopped would be at the Frenchtown bridge before heading into PA. The section of trail leading up to Frenchtown feels pretty remote. Again we really didn't see any other people, and the flatness of the trail doesn't offer much variety. There are some really beautiful surrounding landscapes but this section felt like it dragged a bit.

We went through the marathon mark around 4:40 and the 50k mark under 5:30 as we approached Frenchtown. At this point I was starting to feel it in the legs. I was using a massage gun at Aid stops and trying to stretch out the best I could knowing we had a good deal left.

We crossed the Frenchtown bridge as the wind burned our faces and began the journey back towards where we started. At this point we were running somewhere between 10 and 11 min. pace but still always running so things were going well. As we worked our way through miles 30-38 I could feel some old blisters starting to flare up and I felt like I was significantly slowing as Erica continued to power along. I was doing what I could to try to stay with her. Our aid station stop around mile 39 was a huge one for me. Erica had stopped and fully changed at Frenchtown but I elected not to. I should have. Instead I waited until now and changing made all the difference. Most importantly, I changed my shoes from the Hoka Arahi to my Altra lone peak trail shoes which totally let my feet breathe a little and the blister problem took care of itself the rest of the way. We both felt like we problem solved really well along the next half.

Shortly after our aid station stop, at mile 41 we hit our second bridge closure of the trip. Luckily we were running parallel to River Rd and we were able to quickly jump up onto the road and back down on the trail within a quarter mile or so. As we worked our away down the trail we were both feeling excited to get to New Hope which felt like an unofficial halfway point of the second half but it also meant another change in landscape which is always welcomed.

At this point Erica and I weren't talking much, but we were definitely silently working together. I know there were times that I would've walked it out had I been running by myself but I didn't want to let my teammate down. I know that she felt the same way. This was one of the coolest things about the mixed gender FKT. We were side by side working as a team the whole time. Both silently managing our own thoughts and feelings but also aware of each other's. It was awesome.

We rolled into New Hope (somewhere in between mile 46 and 47) some time while it was still light out and grabbed the headlamps even though we may not need them for another hour or so. New Hope was hopping with people out and about on the town. I'm sure to onlookers it was a very interesting scene: the two of us working to get rolling again, hydration packs on and all while most people are out at the bars. Regardless, it breathed new life into our journey being back in a more civilized setting. Onward we went.

We ran roughly 7 more miles as dusk turned to night at somewhere around 11:30 pace Until we reached the outskirts of Washington's Crossing. Hitting 50 miles was a huge milestone knowing that there was still some work to be done but also mentally knowing that we were going to at leas finish what we started. There were two instances from here to the finish where we had to cross on top of spillways that had water on top of them. Luckily, our feet dried out fairly quickly but running through water at night in freezing temps could've derailed the journey pretty quickly.

We made our last aid station stop in between 53 and 54 and hit the trail knowing that we were going to run to the end. As we made our away through these miles there was definitely a change in our intent. Whether it was the feeling of almost being done or the competitive spirit that we both have, we picked up the pace as we approached the end and our last five miles or so were all back under the 11 min mark. I was doing everything I could to stay with Erica, just holding on and trying to get to the end.

With roughly a half mile to go the lights of the Calhoun Street became visible and our journey was winding down. We hopped onto Delmorr St. in Morrisville and finished at the base of the Calhoun St bridge, where we had set off twelve and a half hours earlier. It was an awesome day with an unbelievable teammate. I hope this route helps bring to light the mixed gender FKT category and how awesome this style of running can be. We both had to be on to run a time that we felt proud of. We certainly feel like we did that!