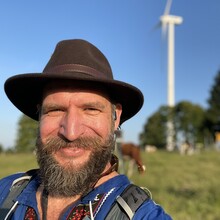 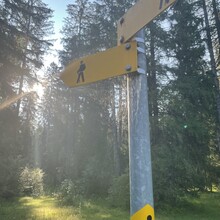 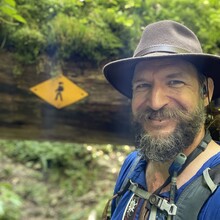 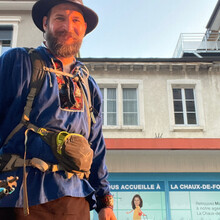 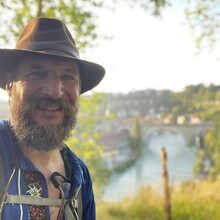 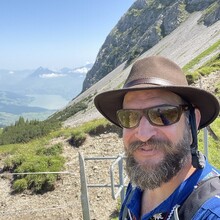 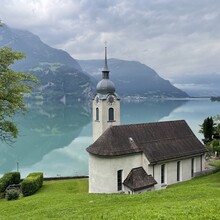 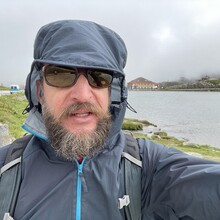 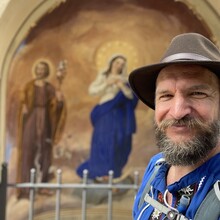 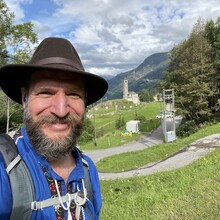 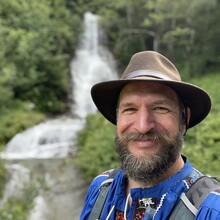 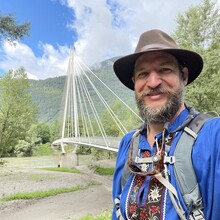 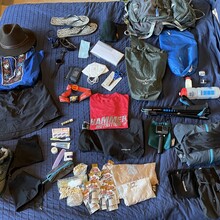 I successfully ran the Trans Swiss Trail across Switzerland. I ran solo and self-supported. The trail goes from Mendrisio in the southeast to Porrentruy in the northwest, but neither are quite on the Swiss border, so I ran a bit extra to include starting at the border with Italy and ending with the border at France. I started in Chiasso, Switzerland at 7:31am on Tuesday, July 13, 2021. A border official questioned me for filming a small pedestrian gate at the border. I was joking on camera that this is how Switzerland locks its country. He didn't like my joke.

A few miles later I arrived at Mendrisio, Switzerland and the train station there. That is where I saw my first trail sign for the Trans Swiss Trail. It is a national trail and is marked with a green square with a white #2 inside. The first one I saw was just outside the train station pedestrian underpass. I left that first sign at 8:53am on Tuesday, July 13, 2021 and continued to follow the Trans Swiss Trail across Switzerland. For maps I used the official route as listed on Schweizmobil.ch, a popular topo hiking website. That route nearly perfectly matched the signed marked trails I followed. Only in a few places did the signs on the trail conflict with the online map. In those cases, I followed my online map. I needed to vary from the route only a few times. Due to historic rains this year (the worst in 70 years), the shore of the lake near Lucerne and Sarnen had spilled their banks. Also, the lake at Neuchâtel had spilled its banks and the ferry was not running to protect the flooded shoreline. To get around the flooded lakes, I ran the closest road to the shore and returned to the trail as soon as it was possible. I also ran back to the trail periodically to make sure it was still underwater at that point. The trail crosses Lake Lugano by using a ferry, which I did. I also crosses Lake Neuchatel on to a ferry which was not operating. To solve this, I ran to the dock where the ferry would have picked me up, then ran back up the road to the next available bus stop, boarded a bus and train which took me around the lake to the town of Neuchatel, and then ran down to the shore to the docks where the ferry boats were parked. In this way, I didn’t miss running any section of trail.

I did not have a support vehicle, but did make online reservations at hotels each night. I also shipped 3 boxes of supplies ahead to these hotels, which any guest would be allowed to do. For water, I resupplied at passing farms, as they often have free running water at troughs. If I were passing through a small town midday, I often stopped for a light meal from the grocery store. I nearly always ate dinner and a light breakfast at the hotel each night and morning.

For a bit of fun, I decided to run in a skirt. I wanted to know if it gave me more freedom for my running stride and I was very happy with it. I also wanted to honor local culture and ran in a traditional heavy cotton long sleeve work shirt with fancy embroidery on the neck, shoulder, and cuffs. While this was often hot to run in, it stayed damp much of the time with sweat and that had some cooling effect. I also ran in a traditional Swiss felt hat, though they are usually worn only in winter.

Going up the highest pass of the route, Gottard Pass, I was the first on scene to a motorcycle crash. A rider, coming down the mountain road next to my trail wobbled and crashed headfirst into a tall stone block wall at a sharp curve. He was unconscious when I got to him. His other biking friends arrived and treated him. An ambulance was called and by chance, both a paramedic and a van full of Swiss military officers arrived on scene. Thus I resumed my climb up the mountain.

I arrived at the Porrentruy Train Station on Friday, July 23, 2021 at 7:56pm. Total time for running just the Trans Swiss Trail was 10 days, 11 hours, 3 minutes. After that, I showered, got dinner, and slept.

The next morning, I woke up early and ran the final 14km to the Swiss/French border at Boncourt, Switzerland arriving at 8:15am on Saturday, July 24, 2021. The total time for running from Chiasso to Boncourt (border to border) was 11 days, 44 minutes.

I took a train home from Boncourt back to the Hasliberg in Canton Bern where I live and teach at an international boarding school in the Alps.

No one ever ran with me on this trip. And no one ever came out to meet me or cheer me on. Though I have been learning German for two years, I still struggle with the language and I know almost no Italian or French, which is spoken in the first and last third of the route. Still, most people were helpful and kind.