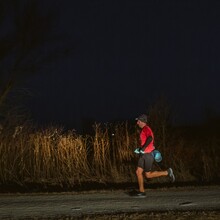 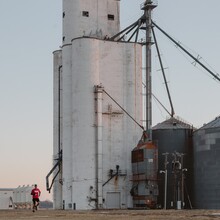 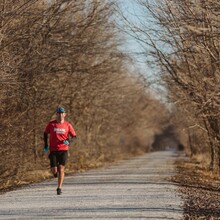 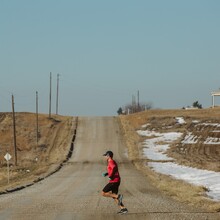 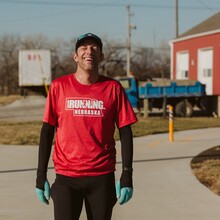 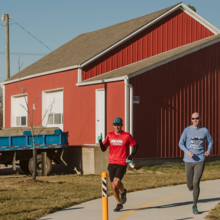 With my last potential race of the year being cancelled, I needed something to put my energy towards.  Had this route in mind for awhile, when it was as an FKT route that did it.

Planned unsupported, but I've come to rely on family and friends this year and just thought it would be more fun to share.  Photographer and general moral support done Kimberly Bailey (former student-athlete of mine) and the last five miles I was joined by Mitch Bern, fellow teacher and coach.

Perfect (for me) morning.  Low 20s, calm, and clear.  The weather and starting in the dark made me have to adjust to some gear choices.  I'd run 50k in races before, but it had been awhile for a flat, fast effort.  Waistbelt with calories, extra beanine (not needed) and my hat for later in the run.  Also a single water bottle.

Trail conditions were solid.  This effort actually got delayed a bit with a snow storm the week previous.  Patchy snow and crunchy ice, mixed with four wheeler rutted tracks made for a slightly engaging effort.  But mostly clear trail allowed me to just run for the most part.

Stayed relaxed the first 10 miles, then a bonkers sunrise got me going faster earlier than I had planned.  Went with it.  Calories at mile 8 and 15.5 got me through well.  Thought about doing one more at the marathon but by then didn't know if the effort would be worth it. Vanishing sight lines in the last 10k made it a mental challenge.  But pace remained really solid all the way through.

On to some other adventures in the state now.