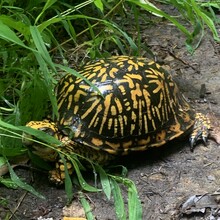 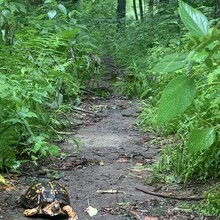 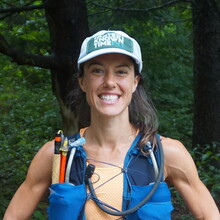 My husband and two sons, ages five and nine, camped at Raccoon Creek State Park for the weekend. On Saturday night, a thunderstorm began at 11:30 a.m., with heavy rain beating down and lighting illuminating our tent until about 4 a.m. The weather had called for 84 degrees and sunny all weekend, but instead we had temperatures in the mid 60s and 70s, and a giant storm. I did not sleep that night but was happy when the storm broke, because I really wanted to run but not in lightning and thunder that intense. My family dropped me off at the start, the state park office, and I took off around 9 a.m. They met me back at the start/ finish four hours later.

This was my first time to Raccoon Creek. I had never seen the trails before and was excited to explore new terrain. My plan was to run steady and not max myself out, to NOT do an all-out effort and NOT to run at race pace, which for me is a nice easy 12-minute per mile average.

At the start of the run, I was felt tired from the storm keeping us up all night. As soon as I turned off Rt. 18 onto Forest Trail, I took the wrong turn to Lake Trail. It only added a couple minutes, maybe 0.2 miles at most, as I quickly realized I had read the well-marked signs incorrectly and ran back to Forest Trail. The trails are VERY well marked - this was a silly mistake on my part. For the first hour, I felt groggy and was happily greeted twice by two adorable box turtles that I just had to photograph. Normally, I would not be caught dead wasting time digging my phone out of my pack to take photos during a race or FKT, but I had no time to beat and really love turtles :)  Plus, I wanted to show my sons what I had seen.

The trails were wet and muddy but not terrible, with innumerable creek crossings up to my ankles, which I love. The vegetation hung into the trail, and I was soaked from head to toe from hitting against it most of the run. The trail was never overgrown or unmanageable, and I could see where my feet landed the entire time, unlike some overgrown trails I've run. Some reviews of the trail said it was terribly overgrown, so I took one trekking pole to bush whack just in case but definitely didn't need it. It is a typical green, thick, forest-lined Pennsylvania trail. I saw lots of pretty bee balm wildflowers and chanterelle and chicken of the woods mushrooms.

I tracked the run on GAIA and my Garmin fenix6. GAIA recorded 2,180 feet of climbing and 19.5 miles, while Garmin said 3,618 feet of climbing t 19.04 miles. My watch always reads distance less than what maps say, and usually less than what my friends clock on their watches when we're running together. As for the discrepancy in the elevation, all I can say is that it has good punchy climbs and descents, nothing killer, along with quality, fast sections.

This route is straight-forward, a fun, runnable course, with no giant climbs as stated above and no super technical sections. Only one rock garden sticks out in my mind. I do recommend it and look forward to coming back and shaving some time off my FKT now that I don't need to consult maps and won't feel the need to take photos :)