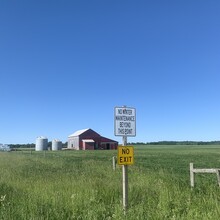 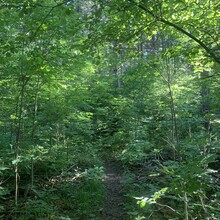 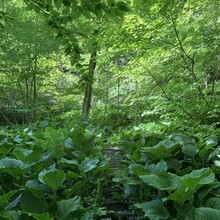 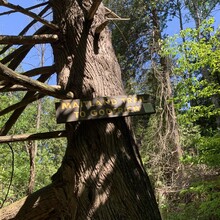 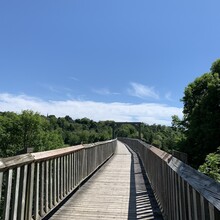 What a gift to wake up to cool, spring temperatures Saturday morning after an unusual heat wave the week before. I chose to run the trail east to west, as Goderich would offer more opportunity to refuel when I finished and catch a taxi back to my car.

I parked under the Auburn bridge and headed off at 7:55am on well-rested legs. My training and weather good fortune led me to expect a faster than predicted finish time. But the Maitland Trail should not be underestimated.

The trail starts with some runnable double track winding through dense, shady forest along the river’s edge. It opens up into a couple kilometres of farmfield, which I suspect is a challenge any time of year. Tractor ruts, young crops, and last year’s corn stalks made it awkward, but the cool morning breeze and sense of gratitude toward the farmer kept the stoke high.

Ten kilometres in, I was still feeling great, stretching out the legs on some rural gravel roads.  Dense, spring vegetation welcomed me back to the trail at around kilometre 12, making it difficult to see roots and rocks. The trail feels like the west coast, with its narrow single track, lush ferns, and gnarly cedar and pine roots. Not strong on technical terrain, it slowed me considerably. My unnaturally large feet in a pair of Hokas threaten to send me ass over tea kettle (as my British friend likes to say) at any opportunity. This was a training run for me, so a shattered knee was best avoided.

A week of little rain meant the trail was fairly dry. Small wood bridges suggest it can be rather muddy other times of year. I’d used enough bug spray to take a year off my life prior to leaving, so the bugs kept their distance. Not sure I would’ve made it out alive otherwise.

Things started to fall apart around kilometre 25, when I was struck with a headache, cramps and back and leg pain. But it was such a beautiful day, I kept the positive vibes flowing. The route profile is somewhat unassuming; with just over 800m of elevation gain, it feels like a flat 50. But the hills you do encounter are steep and lean-on-your knees punchy, often punctuated by wooden stairs. The downhills aren’t any different.

By kilometre 35 I’d run out of water. I’d only carried 1.5L based on my expected finish and the cooler temperatures. I had a Salomon water filter cap and a 250mL soft flask just in case. I used it to fill up from a small, thin stream, but that was the last of the water I saw available, as the trail takes you up above the river. Looking back, an extra half litre of water would have added negligible weight for this distance and could’ve kept me in better shape.

By kilometre 40, I felt like I was walking more than running. Cramping behind my ribs was making it difficult to run. This was my first attempt at carrying only energy snacks (gels, waffles, bars), rather than real food. I suspect this, in conjunction with dehydration, was taking its toll.

Mentally and emotionally, I stayed in good spirits. The day was too beautiful to be miserable. I finished seven hours and 19 minutes 55 seconds after I started and was relieved to find a water fountain right where I needed one.

While the trail is fairly well-marked, there are some areas where it’s easy to miss a blaze, either due to vegetation overgrowth or poor visibility. I missed three turns and needed to double back to find the trail, costing me a bit of time. But I suspect it was minimal. Having a map with you is definitely encouraged.

While I didn’t have my best day, I don’t feel the need to go back and prove it. I’m a mid-pack runner, and I took this opportunity to set what I’ve jokingly been calling “the slowest fastest known time” on this trail for my first 50km attempt. I hope it encourages the more gifted and experienced runners to take on this FKT. I know they’re out there.

(Note: Can't tell if all my photos uploaded. Let me know if they didn't. I uploaded 19.)