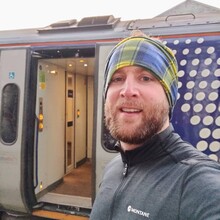 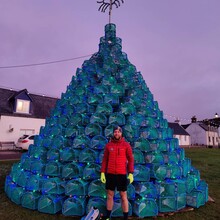 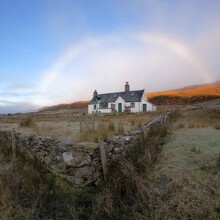 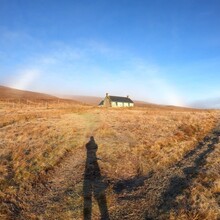 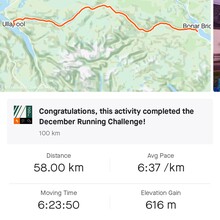 West to east, racing the sun! On Winter Solstice, the shortest day of the year. Starting with my toe in the sea in Ullapool at sunrise (0904 on the TPE app), with the aim to get to Ardgay before sunset (1530 on TPE). I also had to catch the 1530 train to Inverness so that was an extra incentive!

Cold but stunning conditions all day. Crisp cold air, dry and sunny with patches of fog hanging in the glens. From Ullapool up Glen Achall to East Rhiddoroch Lodge is all decent tarmac or a pretty good 4x4 track, with a few small rough bits. Deer and Highland cattle around. You could drive a 4x4 all the way, no sections of single track or overly rough ground.

From the lodge all the way to Duaig Bridge was trickier, with the cold temperatures meaning the wet path, which is a bit rough had loads of icey patches. You could usually run around them but it broke up all rhythm. I carried Yaktrax Runs but didn't bother to put them on, to save time. In hindsight it might have been worth it to put them on.

From Duaig Bridge up the hill into Strath Cuileannach is a good 4x4 track unless you do what I did and take the older track, which was very wet. Wet underfoot all the way into the strath, where a good 4x4 track appears again. Once you pop out onto the road by Croick Church, it's head down and keep moving all the way to Ardgay. I flagged a bit in the last hour, but some Peat and Diesel blasted from my phone kept me going. I was recording a vlog too, in Scottish Gaelic, which I'll upload to YouTube, probably in early 2022. This slowed me a little. A sub 6 hour run is very achievable, which would give time to visit the shop in Ardgay before the train!

One minor wrong way early on, at the junction leading to Knockdamph bothy but quickly corrected. I thought I knew the whole route in my head, but had to check 2/3 times on the OS Maps app to be sure. Navigation is pretty straight forward for this route. Plenty of water available on the route from streams, the land is not intensively farmed and without many population centres so should be ok - there's always the risk of a dead animal upstream! I've always taken this approach in Scotland - but I have been ill once. Nutrition was a mix of Aldi-brand sugary sweets, quite a few soreen snack bars, and a couple of curly wurlies. I carried extra snacks, salty crisps, protein bars and biltong for the train home.

I got a lift from my father to Ullapool, but the run was entirely solo and unsupported.

A very quiet route in winter, I didn't see a soul from the Ullapool quarry until I passed Croick Church, and even then it was only occasional cars.

58km in total as I forgot to stop the watch exactly once I reached the sea, so by the time I was back on the platform it clicked up to 58.

Thanks to Glenn Tait for info on the route. This makes for a great sightseeing and historical trip through the Highlands - signs of The Highland Clearances and land use in the area, all worth thinking about on a long run.

Nice write up, and good effort on the time! Glad to see the route get done properly and totally agree a sub 6 is possible.