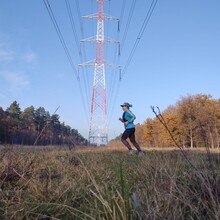 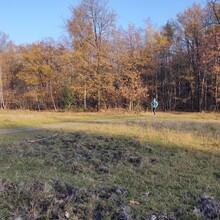 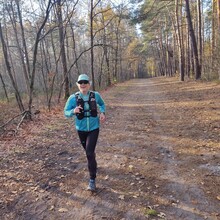 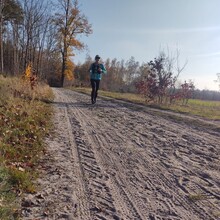 Due to Covid my main goal after the summer (OSO) got cancelled, but I had a backup plan in place. I trained mainly on the course of the LAW Hoge Kempen, as this was almost the same distance, only a this route was a lot flatter. So I did some hill work aside from that. Begin october it became clear that all races for this year wouldn't go through, so we switched to FKT-mode. The main focus was LAW Hoge Kempen from now on.

Before I started the attempt I had run it twice in trainingruns from between 20k-45k. I got to know the trajectory and course pretty well. I selected Station As a the departure place. We could stay overnight there in our van, it's permitted on htat parking lot.

7:58AM on november 29, I started my attempt. Everything felt good was confident I could do it. My husband/trainer even said it might be possible to run under 8hrs... THe first half passed by very quick and I went at it very strong.  I reached Pietersheim in about 3h40m, what meant I had a time of 8hrs within reach. From about 45k it started to go more difficult. Problems with eating and drinking, but that faded after a sanitary stop. I was able to pick up my pace again, at least it felt that way... When I reached Kattevennen it was very crowded with Corona-walkers, people who you normally don't see in the NP. Had to navigate through the masses a little there. Then it was the last stretch back to As. My husband went from gate to gate with the van to support me, he came towards me by bike and kept me company. On that last part It became clear that it would be very close to do it within 8hrs, so I did the best I could and pushed myself to my limits to get there. I even sprinted acoss the bridge in the end and just made it under 8! I was so happy, this realy felt like competing again!

We celebrated with a burger, frites and a beer.