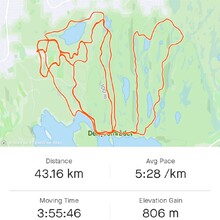 Today I left work early to give it a try. The first hour it was constant light rain but the 10K track went down easy.

Next up was 18 which follows the 10km track but also have a 8km trail part. The trails was flooded as expected and it was difficult to keep up the pace. The sun showed itself for like 5 minutes and the legs felt strong, nice one anyway!

The 8km track was mostly flat and boring. It was here, at three hours and 32km, I hit the usually wall. But with just 11km left to go I knew I could do it.

5km, almost done. Back to hills and everything hurts. Focus.

Ending with the 2,5km track that felt very short even though there was small hills. And then a short spurt to wrap it up!

I also biked to work, then to Skatås and later I biked home. 17km in total ?‍♀️