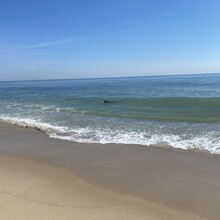 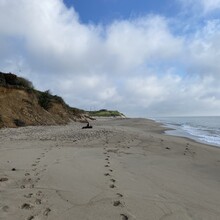 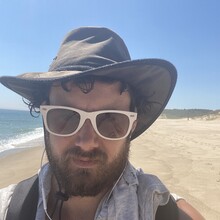 All by myself, I set out in the morning around 7:30am from Coast Guard Beach. My intention was to walk as long as I could, but there was no determined resolve to make it to Race Point. I did however, come prepared with a backpack filled with peanut butter and jelly sandwiches, about a gallon of water, a couple apples, and a 12oz Gatorade. The pack weighed about 15-20lbs which proved burdensome, especially towards the end. I wore Altra Superior Trail shoes, although I did take them off for a few miles towards the end.

After a few miles, I realized my pace was quite slow and it would take me a long time to reach Provincetown. It was hard to maintain a quick pace on the sand. The slanted shoreline by the water became particularly torturous in the later miles. I stopped to eat twice, at around the 8 mile and 16 mile mark. Two other times I stopped to jump in the water quickly too cool off. I also ate the two apples on the go.

It was tough going but it when I checked my progress on the map it did appear I was making decent time. This, however, was an optical illusion as the curve around Truro to Provincetown proved to take much longer to complete than I initially thought. I also didn't know exactly how far the route was, so it was tough to gauge how much longer I had to travel.

At any rate, after mile 19 I felt I was capable of making it to Race Point, although my legs and feet were in great pain and the joy of walking on the beach had long since disappeared. Walking on the slanted part of the shore, despite having firmer sand, was mentally and physically exhausting so I moved to the upper beach on the flat, softer sand. Tired of walking, I would do a little shuffle run that used more energy provided some relief as it used took different muscles in my legs to execute. I didn't want to burn out, though, so I would rotate this on and off for about one minute at a time.

Most of the route was empty beach, but the last stretch did feel particularly remote, as the Truro and Provincetown dunes stretched for miles on your left, with of course the Atlantic Ocean a constant on your right. It was brutal, but I took it one step at a time and finally made it to Race Point where my parents were waiting to pick me up.

It should be noted that I chose to run when I did because of the tide chart. You need to make sure that you are not running during full high tide or else parts of the course will not be passable because the water comes high up on the beach. Overall, it was an incredibly difficult run, but was also extremely rewarding to cover so much beautiful beach on foot with seals almost constantly looking at you from the water.