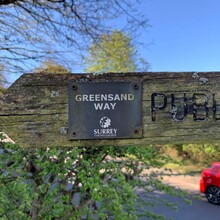 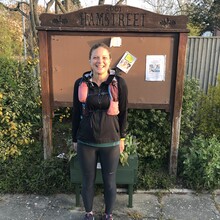 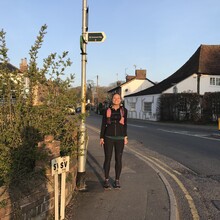 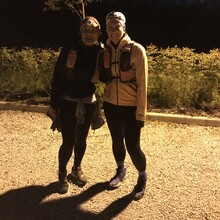 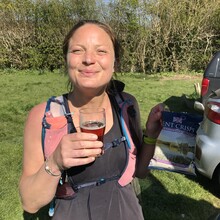 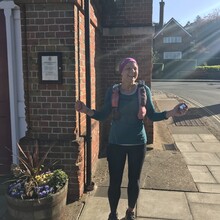 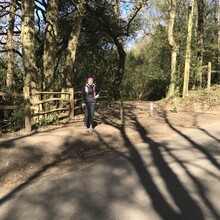 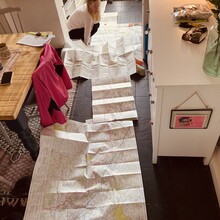 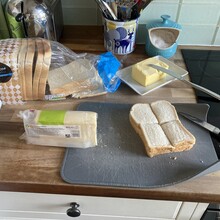 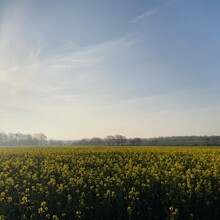 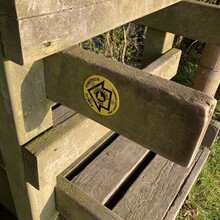 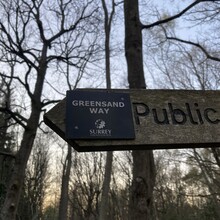 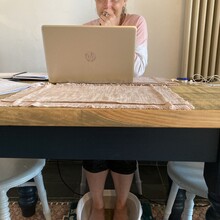 The Greensand Way is a lovely trail that takes you from Hamstreet Kent all the way through to Haslemere in Surrey.  The route is mainly trail with small road sections and it winds through stunning areas of outstanding natural beauty.  It sits nestled between the North and South Downs and largely follows the Greensand Ridge.

Whilst well sign posted for the most part, the route requires preparation and planning to ensure you’re on the right path, particularly through rambling farm fields and orchards.  I planned with my crew before taking part so that we all new the journey we’d be on.  Having carefully planned check points where my wonderful crew could meet and refuel me made the absolute world of difference.

Seeing their encouraging faces every 5-10 miles broke the route into much more manageable chunks and helped me to try to focus on one small bit at a time rather than the whole length ahead!

I planned to try and get as much of the run done in daylight as I possibly could, which meant a 3:45am alarm from home in Guildford to get to the start in Hamstreet for a 6:30am set off, in hindsight I would definitely recommend staying near the start the night before to avoid being sleep deprived before even setting off!

The start of the run was glorious, having never spent much time in Kent I was stunned by the beautiful countryside and landscapes around me.  The route starts of relatively flat and for the first 40 or so miles felt really pleasant with the sunshine showing off the best of Kent’s orchards and farms.

Most of the check points we’d picked along the way were pubs so that the crew had somewhere to wait, so that we could buy fuel if needed, and so that they would be lit during the night.  An added benefit was the merry locals with words of encouragement and a chance to refuel with a local ale and crisps!

A brilliant friend, and strong ultra-runner herself had somehow been persuaded to be bonkers enough to join me for the night section.  By 4pm I was craving some company and was looking forward to temperatures cooling off during the evening.  I hadn’t fully anticipated how chilly it would get, or how sleep deprived I would be.  By the time night fell my poor friend had to accompany me on a steady but slow trudge whilst I complained about feeling sick and begged for 10 minute naps!

Eventually at 5am I stopped and took a full hours sleep, by this point I was seeing things in the woods but knew better than to say anything as I recognised that the giant arm I was seeing and the diggers and work men in the woods were a hallucination.  Upon waking I debated quite strongly giving up.  Still with 30 miles to go I knew that all I could do was walk, and the prospect of a slog like that on my own felt like more than I could muster.

After a stern word with myself, and some tough love from my crew and amazing support network on the phone I realised that I had no good excuse to give up and so I shouldn’t.  Even if the next 11 hours would be a painful and blister filled trudge, if I could do it, I should do it.  And I’m thrilled I did!

Hitting the section in the Surrey Hills as daylight came gave me a new surge of energy, knowing that I was on familiar (although hilly) terrain gave me a much needed mental breather from the constant map checking, and a coffee and cheese sandwich breakfast picked me up to get me through Leith Hill,  Holmbury Hill and Pitch Hill.

The miles were really crawling along as every step was making my feet protest more and more, with 19 miles to go I was wishing that I had quit when I still had 30 to go.  19 left felt like I was in too deep to stop, but trying to calculate how long it would take with the tragically slow speed that I was capable of was quite depressing!

Eventually with about 9 miles left I found a tiny smidge more mojo as I set myself a new challenge to try and scrape through in under 35 hours.  Before I’d set out my Dad had predicted I’d finish in 35-40 hours, and I decided that was a good gauntlet to try for.

My glorious crew had driven to Haslemere and walked out along the trail to find me for the very last bit.  With half a mile to go I spotted my Mum coming along the path towards me and with 4 mintues to go before my fake cut off we all walked/limped into Haslemere Town Hall 34 hours and 56 minutes after setting off.