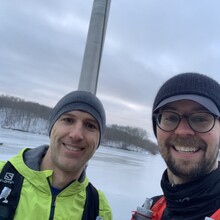 Nick McDonald and I originally planned to run this route self-supported, however we decided to attempt it unsupported to save time dropping food and water. We both had run the Bobcat Trail marathon once, but neither of us had ran Wildcat Hollow. Temperatures ranged from mid 20s to mid 30s with snow covering 95% of the trail with the other 5% mostly mud.

The smaller climbs between Sunday Creek and the lodge area felt a lot bigger than they were. We underestimated how much the snow would wear on us. We only fell once between us and most parts weren’t incredibly slippery, but hours running in the snow definitely added a level of difficulty.

Once we passed the lodge area we were excited for some flatter, less technical miles to finish the run. However, the frequently used trails around the lodge area turned much of the trail into ice. This was discouraging as these trails were some of the most runnable of the course. The further we got from the lodge conditions improved again and we eventually finished ~5 minutes off the supported FKT.

We really enjoyed the route and would like to try it again in more ideal conditions. The snow and unfamiliarity with Wildcat Hollow made the route much tougher than it looked on paper. Also, while reading more about Wildcat Hollow in the write up I’ve seen some people recommending not to filter water in the Wildcat Hollow area due to the old mining activities in the area. Not sure if this applies to Sunday Creek or not but it may be something to consider.