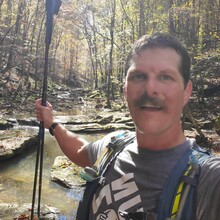 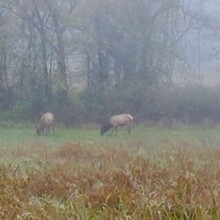 It was a near perfect day on the BRT.

I was going to use a shuttle service, but they were not running to Pruitt because the trail head parking lot was closed due to road construction.   So my friend, John Shelby, drove with me.  We dropped a car a half mile down the road from the Pruitt TH.  He dropped me off at Boxely and then started his run 13 miles ahead of me at Steel Creek.  This way, we would not run together  and maintain the integrity of my unsupported trek.

There were elk at the Boxely starting trailhead which was cool to see.  Many people were there taking pictures.   A knee-deep water crossing within the first 10 yards was a nice “welcome to the BRT”.  The starting temperature was 32 with dense fog for the first 11 miles to Ponca.  This is one of the rockiest sections of the trail and would be overgrown in the summer.  I refilled my water bottles out of the river at Ponca (Be Free filter bottle).  I did not clean my filter from the previous run and it was flowing really slowly and killing time.  There were people taking pictures of the rushing water, but I did not interact with anyone as they were all on the bridge away from the trail.   It had rained for the entire week prior, so the water was wild.  I refueled and took out my poles for the coming miles.  I had previously backpacked the next section with my boy, so I was aware of the steepness of the next climbs.

The fog lifted at Steel Creek (mile 13), and the huge bluffs were now visible.  I refilled water again at a creek crossing a few miles past Steel Creek.  I pushed the pace on the climbs through mile 23.  I was feeling good, the big climbs were over, and I was on track for the overall FKT which was not my original intention.  So, I kept pushing.  There were a few places that I started down the wrong path or that I had trouble locating the next marker when coming to trail intersections or openings.   I had preloaded the route on my watch.  (.gpx file from ouachitamaps.com).  I filled up one more time at a historic homestead (I can’t remember the name of it). My filter was unproductive, so I filled directly from a crystal clear creek there.  Fuel for the day was just gels and drink mix.  There was no time to stop for lunch and enjoy the beautiful views.

The BRT is a classic Ozark trail; probably the best in the surrounding states.  There are four to five big climbs, very technical, and awesome drops into ravines with rushing water and creek crossings.  I wouldn’t want to run the last 6-9 miles in the summer either. There were lots of thorns and overgrowth.  There is much less elevation change in the final miles which I was fine with at that point.   I’ll be back for the tourist paced edition soon.