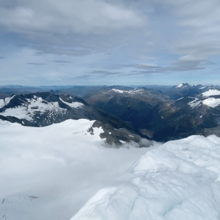 On March 5th at 6:30 am I began an FKT attempt from Raspberry Creek Car Park return utilizing a pushbike to and from Aspiring Hut.

It was a clear morning with a forecast for the cloud in the afternoon. I was worried about the glacier crossing if cloud developed on the way back however pushed on and decided to assess when I reached Bevan Col.

Once arriving at Aspiring Hut and ditching my bike in the trees, I began on foot for the summit.

I broke the run down into stages, first stage was from Aspiring Hut to the head of the Valley. This is relatively straight forward following a trail to a scree slope where the climb begins to Bevan Col.

The climb to Bevan Col can be taken in many ways, this is a crucial place to make or lose time. I knew the route so took the most direct path to the col.

Arriving at Bevan Col I had an amazing view of the glacier and the NW Ridge to the summit. I pushed on to the transition point where I put on microspikes and headed across the glacier with an Ice axe in hand.

After crossing the glacier, I met the first people on the route heading in the opposite direction. After gathering some more beta on summit conditions that was the final check before committing to the summit push.

I passed Colin Todd hut and headed onto the Therma and Iso Glacier which led me to the NW ridge where I transitioned out of my spikes. From the ridge, I took a direct exposed route up through the buttress to 'the notch'. From the notch to the summit it's a straightforward hike/scramble to the summit.

Few photos on the summit and then I headed on my way back down.

I lost my way for a few minutes navigating my way back down through the buttress. Once back on trail finding a cairn I was able to make up the time.

Heading down the Therma and Iso glacier was difficult as the snow was not quite soft enough to dig my heels in and not quite firm enough for my spikes to grip. So the ice axe came in handy a few times.

From Colin Todd hut accessing the glacier required some thought and navigation as it is difficult to have a visible route with the steepness.

After crossing the glacier and heading back down to the valley head I caught up with the party I had passed earlier. After talking briefly and mentioning I was on a mission for an FKT they encouraged me to get going.

Heading down into the forest I met another runner, whom I got chatting with and finally explained I was going for an FKT. He ran with me for the rest of the run and bike back to the carpark.

The valley was also the first time I filled up with water in the river, thankfully it was not a hot day so my water consumption was low.