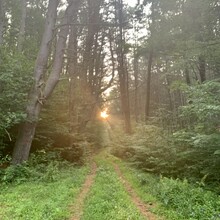 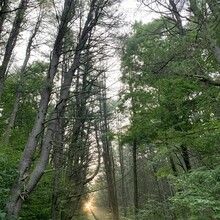 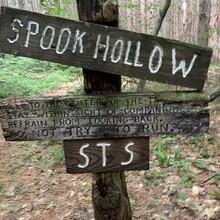 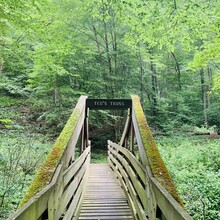 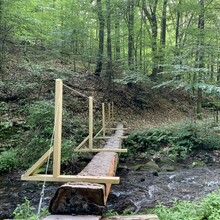 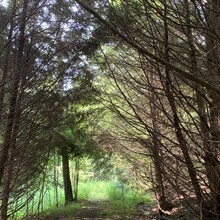 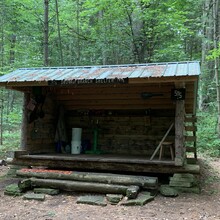 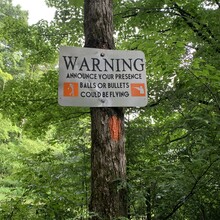 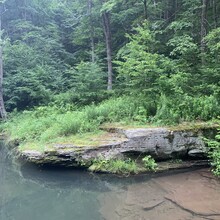 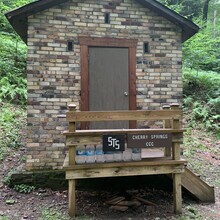 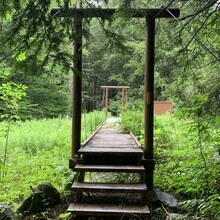 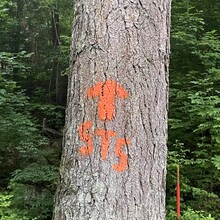 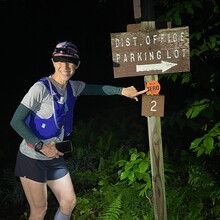 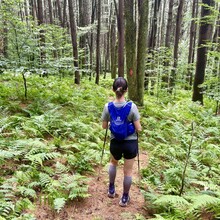 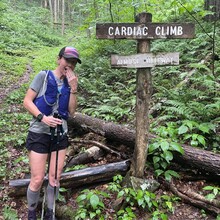 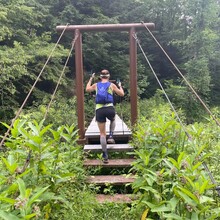 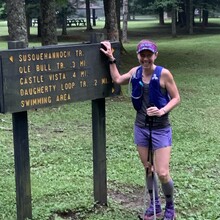 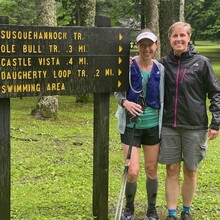 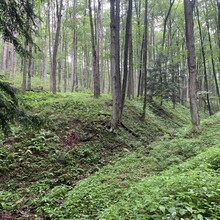 With the Vermont 100 being canceled due to COVID yet again this year, I decided to set my sights on another potential FKT trail run. After some research, I decided on the Susquehannock Trail System. Because Vermont would have been the same weekend as my birthday (7/16), I decided to make this a birthday run too!

After last year’s planning of Horse-Shoe Trail logistics, the mapping of aid locations felt old hat. It was tough to find a house to stay at that was close to the start with the trails being so remote, so we ended up renting a lovely little cottage in Wellsboro about an hour away.

We got to my start at Ole Bull Park with no issues and I was ready to roll at 6 am. The first 10 miles before I saw my crew were exactly as I anticipated - long, slow climbs and descents, beautiful fern and mountain laurel-filled trails, and a morning fog that made everything seem a little more magical. I had one long, steep, rocky descent at the end of that section, but rolled into my first stop on Twelve Mile Road in Cross Fork right on time.

The next 12 miles were tougher. More rocks, more climbs, more heat. A long, exposed climb on a steep hill made the difficulty of this route a little more apparent. The runnable sections were very overgrown with ferns and vines and it made for slow going. So I was behind schedule a bit as I ran into Main Street in Cross Fork and met my crew, but still in good spirits. “The biggest little town in the world” was the most civilization we would see all weekend.

Thankfully my pacer Jess joined me for the next 20 miles, because things fell apart in a hurry. I either was struggling with the heat or having a weird reaction to the 100% DEET spray I had used for the first time to help prevent the bugs from making me crazy.  I was abruptly weak, dizzy, struggling to hike, my hands were having some mild tremors and I felt horrific. So we sat, she doused me with water and wiped me down, and I kept trying to eat. Slowly I felt a little better but I lost lots of time and proceeded to be really slow through that section. My eyes were still weirdly dilated hours later as I finished the longest 10.5 miles ever.

By the time I finished 20 miles with Jess, my stomach was giving me a lot of trouble and I seriously considered calling it a day. I was hours behind my planned schedule and struggling to eat. I wanted input from my crew but they left it up to me. I changed clothes, sat for a bit in the dark, ate some crackers, and felt a little better. I decided to take it one aid stop at a time.

My second pacer Dan joined me for the next 20 miles, pushing and pulling me along, encouraging me, and making sure I was getting at least a little nutrition. I got some caffeine in me and found myself a little more energized and chatty, finally!  While I wasn’t running much, I was power hiking the best I could and continuing to make forward progress, one mile at a time. My final pacer, Royce, also joined us for the final, flatter stretch of Dan’s planned pacing section, as I wasn’t sure if I would continue on after the 24-25 hour mark.

Sunrise occurred shortly after we hit trail mile marker “zero” - the official start from the northern gateway of the Susquehannock Trail System. It felt like an appropriate reset.  Knowing I still had a marathon left to go was daunting, but at that point, I mentally committed to finishing it out, no matter how far behind my original time goal.

Royce stayed with me to the end, through 27+ miles, multiple climbs and descents, creek crossings, and a raging thunderstorm. During that section I learned why people quit because of their feet - mine felt like they had a fire lit under them for about 10 hours. But we kept moving through so much remote and beautiful forest - it was hard not to be in awe of it all.

The last 2 miles felt like they might never end, but finally we turned back into Ole Bull Run Park. I finished just after the 34-hour mark, exhausted mentally and physically, but so grateful I pushed through and didn’t quit early. I can’t say enough wonderful things about my crew - they were my cheerleaders through so many exhausting hours.  Thank you. I am forever grateful.

While the trail was not quite what I expected based on the writeups (no jeep roads!), it is stunningly beautiful and I would readily go back. I recommend checking out just about any or all sections of the trail if you can!