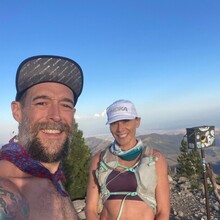 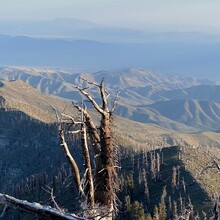 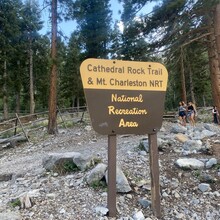 Tina and I had talked about doing this FKT since last summer when we ran the Charleston Loop together establishing a first mixed-gender effort. It took us a year to finally commit and go for it. This is our home mountain and we both have done many laps on Griffith. I think we were both in agreement that we may not be the fastest, but someone has to be the First! So we went for it. We gave it a solid effort despite some heavy legs, a fair amount of cramping, and lingering late summer heat.

We both wore ice bandana's to keep us cool during the first half. It felt great! Tina used poles, and wore a vest. I went light with a belt and a handheld. .5L water, .5L electrolytes. 2 gu's. only ate 1. The climb up Griffith was hard, as per usual, lots of elevation packed into not a lot of miles. The summit was beautiful, the evening colors were starting to fill the sky. Perfect conditions on the summit, cool and calm. We took a couple of selfies and Tina stowed her poles, and down we went. I had some stomach cramps on the way down, but pushed through and did my best to keep Tina in my sights. I had to really turn it up the last mile as Tina dropped a nice kick, it got my heart rate up above 170! That's pretty good for this old man!

Not a perfect run, but we crushed it. A total blast. We passed several hikers but they were cordial for the most part and let us pass. One guy tried to run ahead of us but quickly got passed and dropped, sorry Brah! Who's next? I know a few locals who might want to take a crack at this one...