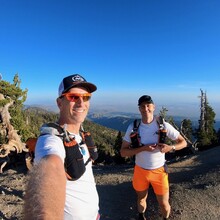 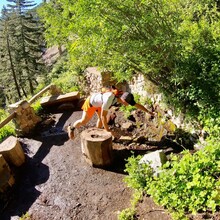 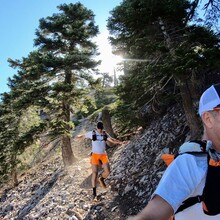 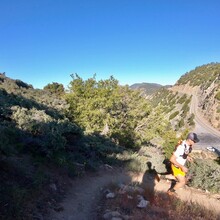 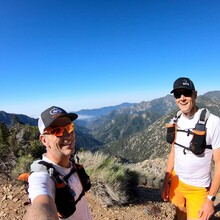 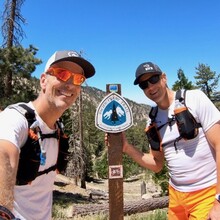 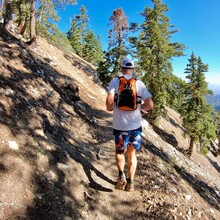 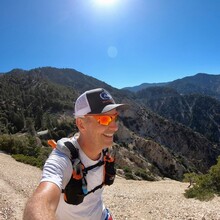 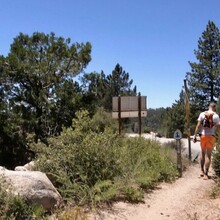 I felt better than usual on the miles between Mt Baden Powell and the turn to Mt Islip. I’ll often get a lightheaded ‘woofiness’ up there on the ridge. I chalked it up to not having done Acorn earlier in the day, and still having cool early morning conditions. That is such a nice stretch of trail up there. Gratuitous even! Chad and I took it all in while producing a steady rhythm with our feet. Conversation inevitably turned to AC100. We agreed that the toll on the body that the race demands is completely insane. We’re both registered in 2021.

I carried 5 qty 0.5L clear plastic Kirkland Signature water bottles with the labels peeled off (2.5L carrying capacity), 12 gels and 3 waffles, and 3 S-Caps. I refilled all 5 bottles at Little Jimmy Spring plus slugged .75L while I was there. I refilled 1 of the bottles later at a small stream between Eagles Roost and Cooper Canyon. I wish I would have topped off the empty in the back of my pack, plus slugged a L at the stream because I ran out of water before the run was over. I could feel the ‘WOOF’ creep in as I slowed my hydration and calories while the heat of the day rose. It’s so interesting to me that Chad and I have such different hydration needs. Chad requires about half the water I do. I finished with 1 or 2 gels and a waffle left in my pockets. I did the first 3 hours of the run pumping a nice 300 calories per hour but slowed to 100 calories in the latter hours. This is an opportunity for improvement. I think if I can keep the water and the calories flowing in later miles I’ll perform better. I had significant salt lines on my pack at the end of the run which might indicate slight over consumption of electrolytes. Then again, I did not cramp, and my urination was reasonable (by ultra standards) even up mile 26, so I think I stayed out of the danger zone.

Slogging up Mt Williamson we encountered the most muscular and lively rattlesnake I’ve ever seen. The serpent blocked our path: thorns above and below, steep and loose all around. I grabbed a 6’ log and some rocks and persuaded the snake to move itself downhill. The coiled pose the rattler made as I addressed it could not have been more perfect. Quintessential. Textbook. David Attenborough special. Superb. Chad, once again, was the one who first spotted the snake, further reinforcing his PCT trail name, “Snakeyes.”

We soaked our shirts in the Cooper Canyon creek about where Burkhart Trail meets the PCT. This was nice. We liked the cooling while keeping our shoes and socks dry. There were several trout in the pool upstream from us. What a wonderful place!

Climbing out of Cooper Canyon, our fast hiking pace could not keep up with a thin thru-hiker who dangled out in front of us. We passed the thru-hiker on a downhill stretch and kept rolling for a nice bit of time until I wrenched my left foot on what looked like a completely buttery patch of trail. Stupid. I don’t know. It was a roll of the foot/ankle that was bad enough to hurt for the rest of the trip, but mild enough to not not produce purpleness or swelling. Our pace was largely governed by my game left foot thereafter, about the last 5-6 miles.

We trudged to the finish at Three Points feeling like we left it all out there, which was one of our goals for the day. Mission accomplished. Incredible adventuresome fun!

Thoughts on the run:
- It was an amazing morning
- Cool temps for a little while and incredible views
- Baden Powell is a big mountain to start a long run lol
- The PCT from Vincent Gap to Islip is in great shape
- The PCT climb out of Islip Saddle is a big one and there is a very large black Rattlesnake that was in a very bad mood today....
- Cooper Canyon is awesome, trails are in okay shape with lots of down trees, very slow going down there
- Chris rolled his ankle just before Cloudburst and the heat was ON as we worked our way out of Cooper Canyon
- The climb to Cloudburst is bigger than I remember
- There was a car accident off the side of Hwy 2 just after Cloudburst, they should be thanking God that the tree stopped the car, sheriffs were present and taking care of the situation
- We both ran out of fluids, Chris with 2 miles left and I had about 1/2 mile to go, not too bad for me but Chris got light headed with a little over 1.5 miles to go
- Saw another snake heading into three points
- We finished, much longer than expected once again and are humbled by the PCT..
- These unsupported long runs are really tough in the heat. Aid stations with cold water and ice are so needed....