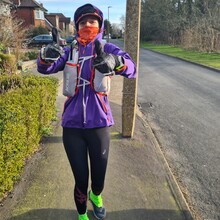 First attempt of the full route from start to finish and I did it as part of a 50km virtual race hence the (stupid) choice of doing it during the Beast from the East 2. On a positive note the mud path from the week before had gone from the trail but had been replaced with ice and rock hard mud tracks which could have broken and ankle or two and definitely made things a bit tricky.

I started in the North (Springwell Lock) to get the hills over and done with first but also meant that I got some of the faster parts of the routes (i.e the canal) done early too. The beginning of this route is so beautiful and you feel you are in the heart of the countryside despite being in a London borough. As expected in a lockdown and with a wind-chill of -12 there weren't many people around on the route. Some of the narrower parts of the trail did need me to stop and / or cover my face to allow the hardy dog walkers pass but it didn't slow me down as much as that churned mud in the Ruislip woods which was pretty dangerous and meant I had to walk down hills I had previously bolted down on. Once out of the woods and into the suburbs of Ruislip/Ickenham/Hayes the route is almost completely flat but comprises of meadows, woodland and nature reserves. Here there are plenty of newsagents and garages for water/snacks on the route which I used to grab a coke and top up my water.  There is a diversion around the Ruislip Golf course (closed due the HS2 work) which takes you out on to the main road for a bit but you are soon back into Ickenham marshes.  The only other diversion was out from broadmead fields to spikes bridge were a knee deep puddle/pond had frozen over making it impassable but you can leave the fields further back into the housing estate and go round to get back to the the bridge. From there its canal towpath all the way to the finish at Cranford.  The whole route is 'advertised' as 20miles but even with the extended diversions its more like 18. The whole route is well sign posted so easy to follow as long as you ignore the North and South Links signs and stick t the main trail.