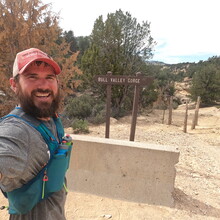 I was here last year and did a small hike of upper Bull Valley and Willis.  It's very unique.  Once I saw there was an FKT on the loop, I wanted to try it.  I got there this year a few days early to check out the obstacles in Bull Valley.  I found several small chokestones with minor down climbs required and a few muddy cesspools which could be avoided within the first half mile.  Then I hit a bigger pool of water, a short ways down from the bridge.  It was wall to wall water for about 20'.  I thought I could wade through it and started in, but quickly realized it would be a swim.  I continued down canyon about another mile with no other obstacles encountered, and then climbed up and out of the canyon and hiked back to the trailhead along the rim trail.  The good news was all obstacles were passable.  The bad news was that a swim would be required within the first 2 miles of the run.  I rested a couple days, then with rain coming in the forecast, decided it was now or never.

I started my run at the Bull Valley TH shortly after noon.  I decided to start later in the day to let the temps warm up a bit since I was not looking forward to the swim early in the run. I entered the canyon and carefully picked my way through the upper obstacles.  I got to the water pool, jumped right in, and started swimming.  Quick enough I was out and running hard to try to get warm.  I continued down canyon with few obstacles and fairly smooth dry river wash running.  As the canyon turned East it opened up and I began trying to pick the best lines to run.  I then turned to the North and started up Sheep Creek.  Again, there was no defined trail, so I picked the best lines I could, bouncing back and forth from running sandy/rocky benches to running up the creek wash.  The miles were ticking by, and I was making good time.  I made my left to Willis Creek and saw some people looking at the ancient art panel that is at this intersection.  I hadn't seen anyone up until this point, but as I continued up Willis Creek I began passing several more people.  They all cheered me on as I quickly explained what I was trying to do.  The encouragement definitely helped give me motivation to keep pushing on up through the beautiful canyon.  I exited the trail and began the last leg of the loop on the road.  The initial climb up I power hiked before getting my legs going again for one final last run mostly downhill back to the Bull Valley TH.  I completed my run in 2 hrs 25 min and 30 secs.  I had not done much canyon running prior to this, and was very happy with my result.  I brought about half a liter of water in one bottle and half a liter of water with Skratch in another bottle.  I ate some Stinger gummies to keep my legs going as I was coming up Sheep Creek.  I brought my camera, but was putting in too much effort to take any pics during the run.  Only pic was at the finish.  Great loop with lots of interesting history and amazing geologic features!