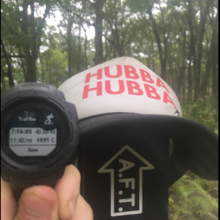 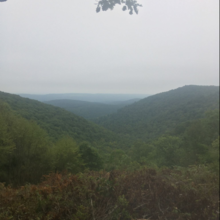 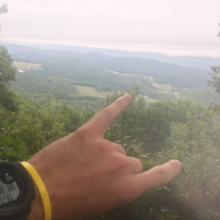 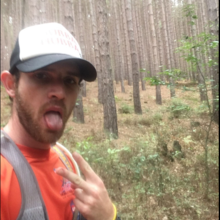 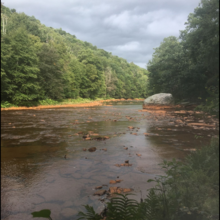 So here we go.. The Black Moshannon and I have some beef. I've had a lot of adventures that have gone wrong in Black Moshannon including a pretty serious gravel bike reck. That being said, the Alleghany Front Trail (AFT) has a special place in my heart because it is where I did my first ultra and where I got first place in my age group. That race made me fall in love with this trail and gave me the confidence to purse ultra running.

Last year I completed the full route for the first time. I went clockwise because that was the 42ish in 24 challenge (42ish miles in 24 hours) recommended route by purple lizard maps. They recommend clockwise because this challenge was orginally set for average hikers. These hikers would start very early in the morning and hope to see the sunrise at Ralph's pretty good view. However, I would start at 7 am (way after sunrise) and finish 11 hours later. I knew I would be back the next year to try it again, and to use it as a route to train for my next race.

That leave me to Saturday 9/12/2020. The day I would set my first FKT with a sub 8 hour time. This time everything was way more refined than the first time.

I planned the route to be counterclockwise this time. (I plugged in standard route, there was no counterclockwise route, sorry let me know if and how I can change that) I chose counterclockwise for many reasons. First, that is the direction the 50K is run and they must do that for a reason. Second, the best parts of the trail are: The tunnel of fun (mile 21ish) and Ralph's vistas (mile 38ish). It is a huge mental boost to be looking forward to these sections on the hardest half of FKT. The worst parts of this trail are the rocky section right before the end (mile 38ish) and the Red Moshannon (mile 11-17 CCW or miles 24-30 CW). The rocky section is rocky it just slows you down no matter what, there is no running that section whether you start with it or end with it. I chose to end with it. The Red Moshannon on the other hand is a different challenge. If you run it counterclockwise you run next to it at mile 13. Your legs still feel fresh for the rocks and you are in a mentally stable place for when you see the depressing river. If you run it clockwise you'll see it at mile 26ish and it will mentally and physically destroy you. This is because the Red Moshannon is actually a section of the Black Moshannon that has been polluted with acid mine drainage. Nothing about it looks natural. It will both piss you off and make you sad. You can tell just by looking at it; nothing lives there. But anyway, thats why i went counterclockwise.

I woke up around 5:30am. I made myself a breakfast sandwich with bacon, eggs, on a bagel (breakfast is important this is why I'm adding it) I started the route around 7:30 heading north. I left my drop bag at the intersection of 6 mile run and Rattlesnake Pike (route 504).  I had a Nathans pack with me. It holds 2 liters of water, two handheld bottle full of tailwind, 3 stroop waffles, and a clif bar.  The first  part of the trail is smooth (for a PA trail that is saying a lot). This helped me maintain a good pace below 9 minutes per mile for the first handful of miles. Around mile 8 I ate my first stroop just to get fuel in me. My pace didnt slow until I entered the section known as the jungle. This section is a few miles that is just covered in rotadendrons. They block out the sun and probably screwed up my GPS a little. You also have to crouch run for a bunch of this section. Once i passed Black Moshannon creek, I was onto the next section, which is the 50k section.

The 50k, Red Mo, 6 mile run section is tough. It has a large climb, a fast old logging road downhill, the rocky Red Moshannon section, and the rocky six mile run section. This section is tough. I tried not to look at the Red Moshannon to keep my spirits up and I tried to maintain a sub 12 minute pace on the super technical parts. This was the first time I had to hike the uphills. This section ends at Rattlesnake pike which is where I stashed my dropbag/lunch.

I spent 10 minutes eating lunch. I  had a protein shake, gatorade, stroops, water, 2 turkey bacon wraps, and mashed potatoes. I drank the shake, had two bites of potatoes, refilled water, filled my minibottle with gatorade, and took one of the wraps on the go. The next section I had to look forward to was the tunnel of fun!

Zooooom, I flew into the tunnel of fun at an 8 minute pace. The tunnel of fun is 100ft tall spruce trees that are perfectly lined in rows and columns. It feels like you're in a different world.

The next section was boring, and not much to talk about. I started to run low on water at about a Marathon and all the creeks were dry. I did almost get lost and ran about a half mile out of my way because the signs confused me. I had to backtrack to get on the AFT. I eventually made it to the Moshannon lake/ swamp area around mile 30. There was finally water here so I refilled and attached my sawyer to my pack. I probably didn't need the water but it gave me a big mental boost. I did have to suck the crap out of the Sawyer to get the water started which was annoying. I has half temped to just drink from the swamp but I would get sick for sure.

The next section felt like all uphill. My mile  times started to creep about 12 minutes for this section which concerned me. My heart rate also hit 175 which I took as a warning that I was getting dehydrated so I drank from a little creek I had to cross to  get more water quickly. Eventually, I came to a crossing where the AFT Happily told me I had 3.3 miles to go. I think i was around 7 hrs in by this point. I passed Ralph's Majestic Vista and didnt even stop. The secret is that Ralph's Pretty Good Vista is way better. I stopped there for a photo and a quick recharge. Then the train became rocky and I gained my last 1000ft in 2 miles. Let's just say my mile time fell to 20 minutes. all I could do was not roll an ankle and keep moving forward. (Also during the second half I listened to my Alan Seeger playlist, the Ted Radio Hour Moving Forward podcast, and my grunge playlist).

Towards the end of this section I saw one more vista, which must be knew because it was not there in the spring. I snapped a photo and started to worry about my 8hr goal. But, just then, I turned off the single track part of the trail onto the uphill double track piece of trail with 10 minutes to go. I pushed myself as hard as I could, without having a heart attack, running up that incline. A few minutes later I would be back at my truck crying a little bit and drinking a red bull. I had completed the AFT in under 8 hrs.

Finally, I drove back to get my drop bag and then got chicken nuggets and a McDouble.

P.S. I signed all of the registers on the trail too.