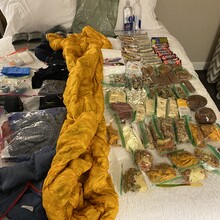 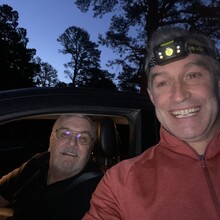 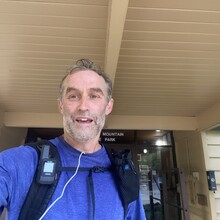 This trail is truly an undiscovered gem – 35k feet of vertical over 223 miles, it is rugged and beautiful especially on the Arkansas side.  There are recently built shelters every 8-12 miles, several of which are in stunning locations.  Couldn’t figure out why so few people were on the trail but I’m sure it will get discovered.  Full credit to the Friends of the Ouachita Trail for their exceptional trail maintenance and website.  Ouachita also affirmed my belief that NW Arkansas is an outdoor paradise and very underrated in that regard.  I will definitely return on a more leisurely basis and spend some time at those shelters.

Regarding the trip, I thought I could achieve my plan with a modest effort but a bunch of mistakes turned it into something much more difficult.  I found out what “unsupported” truly means and it can be tough on a long, dry trail.  In retrospect I counted heavily on Irish luck and what I got instead was experience.

My plan was to cover at least 50 miles each day no matter how long it took, then sleep for 4 hours.  All day I would tell myself, “make your 50, the rest is easy”.  I was pretty confident about finishing the trail in 4 ½ days, and if I happen to be running ahead of schedule and felt like extending myself, perhaps continue through the final night and try to break 4 days.

I’ve enjoyed running most of my life, but when carrying gear and food I prefer to walk.  While getting into backpacking last year I came across a this fellow who walked the PCT in 73 days with his hands in his pockets.  Turns out you can cover a lot of ground in a day and wake up ready to go again.  The key is staying in motion for 4-6 hours at a time and eating on the go, taking just a few short breaks a day.  With some practice I found it possible to cover long distances over tough terrain and still be ready to go the next day.

As far as mistakes made, the first was not understanding trail nutrition.  I packed mainly calorie dense foods to get the most energy per pound (on a longer trail, food is by far the heaviest item in your pack so you have to manage the weight), but it's really hard to eat like that if you're not used to it.  Eating became forced and many times I had to soak food in water to force it down.  I couldn't consume anything close to what I packed and felt both hungry and sick a lot of the time.  Fun!  The second mistake was learning that a heat wave in the South coincided exactly with my trip (my hometown of Austin reached 97f) and instead of delaying a week, I thought “how bad can it be in the mountains?”  Pretty bad, turns out.  The only reprieve from the relentless sun overhead was a thunderstorm that turned the trail into a river.  Instead of seeking shelter I decided to push on to "make my 50", soaking my shoes and socks for the next 20+ miles.  This one really hurt.  I had forgotten what wet shoes do to your feet on a rocky trail and eventually had blisters on every inch of my feet; many of them blood blisters and two blisters had blisters.  I would have paid an unreasonable sum of money for an extra roll of athletic tape or box of band aids, but unsupported means no help of any kind or store visits – you can only use what you packed.  I tried to stay positive especially when running into others on the trail, but man it was hard.

Instead of dancing over rocks I began to gingerly avoid them, which became impossible at night with a dim headlamp (another mistake:  during the storm I dropped my charging cable and backups for both my headlamp and GPS tracker, and had to take steps to conserve battery).  Each rock felt like stepping on a knife and the final 50 miles took me to the breaking point mentally at least a dozen times.  I also missed several trail junctions which added to the long journey.  I was falling behind and realized this was going to be painful no matter how long it took, so might as well get it over with.  I napped for 90 minutes in the dirt then continued through the night and next day until it was over.  The final 20 miles were in a beautiful forest but with the sun above and no wind or cloud cover, it was an oven in there.  Water was scarce and miles seemed to take hours.  Getting to the finish took an effort I did not think I had in me, but I got there and all was well.  4 days, 11 hours and 40 minutes, right on time.

I had some great travel experiences along the way.  Dennis in Fort Smith, AR is a retired media guy and will give you a ride anytime, anywhere – will recommend him to the trail association.  Jimbo 138, a YouTuber that covers a lot of the trails in Arkansas, met him at one of the shelters.  Finally at the end of the trail no Lyft/Ubers were available so I caught a ride with a mountain biker and we grabbed a burger.  All good people.

Thanks to the folks at FKT, love what you guys do!