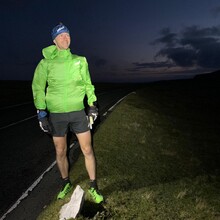 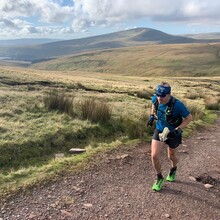 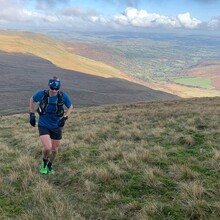 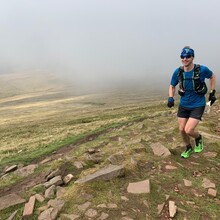 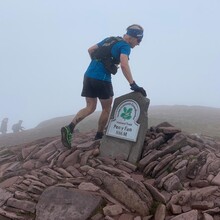 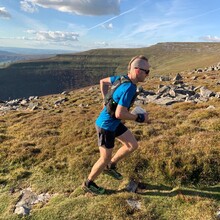 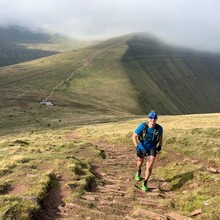 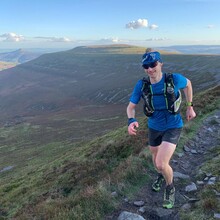 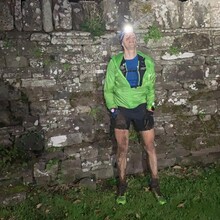 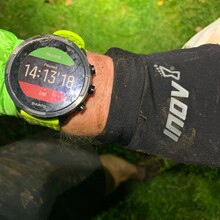 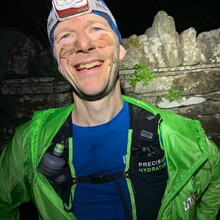 The first leg was cloudy, but went very well.

On the second leg I was hit by a strong wind from the north and it was boggier than expected, but all good fun.

I was joined by a pacer towards the end and for the start of leg 3, from Storey Arms and up to the Hollywood section, which had some clag. I lost my schedule up here and started to think I was getting too far behind record pace. But not so, I found out when I saw my crew in Abercrynafon (after missing one of them in the woods just before).

It was a slog, as ever, getting to Cefn yr Ystrad, which feels like a cruel joke.

My crew surprised me at the bottom and I was very pleased to have a pacer (thanks Mark!) for the terminable road section.

I went through Glanusk Estate, up through muddy fields. Being joined by pacers (again a surprise – thanks you Tim and Lee!) the epic climb up Pen Carrig-calch, which went well and got me up on schedule.

It was a gloriously textbook evening up on the Black Mountains plateau. I always knew the record would be tight and I was up by three-four minutes on one peak, then down by three-four on the next, with my mood seesawing accordingly.

Dan Summers joined me on Pen-twyn-mawr and thanks to him we nailed the lines through the treacherous Mynydd Du Forest.

The record was still very much in the balance at the final support point, Gospel Pass, and despite a wonderful cup of tea (thanks Kerry!) I didn't climb well up Hay Buff. Then it was head down and 'How much do you want it?' time.

Ironically as my headtorch appeared visible on the hill top to those waiting in Llanthony, they've since admitted they thought I'd left it too late. But it was the first time for hours I thought it might actually be on.

We hammered that descent (including posteriors coming into contact slippery mud) and made it to the Abbey wall (south side, between the two car parks), at 14 hours, 13 minutes and 18 seconds. A cracking day out.