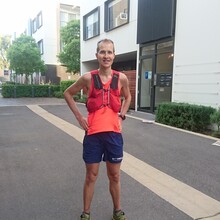 I ran the Adelaide100 on November 17, 2020. Beautiful day, sunny but not hot. I had a first attempt two months earlier but dropped afte 96kms. I ran the course clockwise, starting in Gilberton, because it's about 200m from my doorstep.

I'm almost reluctant to submit this as an FKT since it's barely 5min better than the current one, but this one uses the slightly updated route following the current signage. It's about 1.4km longer according to my watch. I posted the course differences as a comment on the "route page" of the FKT website.

The run was self-supported: I cached three drop bags on the course with food and water during my reccy runs. I also used local businesses (Joan's Pantry in Hawthorndene, and the OTR petrol station in Darlington) to buy cold coke and a few candy bars. Other businesses that might be of interest for future attemps include the Hungry Jack's in Darlington and various kiosks along the coast. There are quite a few places to get water from: