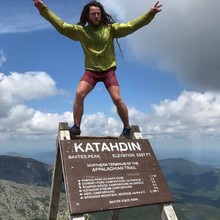 Dan "Knotts" Binde claimed a new overall thru-hiker FKT of 53d22h57m (northbound), but so far this is unverified. Binde carried a SPOT tracker, but there were problems with the device and there are large gaps in the record, which is archived on trackleaders.com. Binde posted his daily miles and an account of his SPOT problems here. However, the report doesn't match up with the SPOT data in some important ways. Also, the SPOT data clearly show a first point on Springer Mtn at 17:28:30Z on 26 May 2017, and a last point on Katahdin at 17:00:35Z on 19 July 2017, for a total time of 53d23h32m - 35min longer than Binde's claim. With the help of others in the AT community, Bill Townsend ("Just Bill") did a detailed investigation of Binde's claim, and issued a 10-page report (also summarized on whiteblaze.net) which concluded that the evidence was inconclusive. Additional discussion of this is on the whiteblaze.net forum, which is devoted to all things AT. Kathryn Miles wrote a piece for outsideonline.com about Binde's claim. Here's an interview with Binde. This situation highlights the need for different types of verification data, including real-time satellite tracking, time- and geo-located photos, and a detailed notes taken during the trip.

Oh the irony.  Using my picture on the AT speed record page.  Discrediting a triple crowner + thousands of other miles.  Using shady Kathry Miles as bait to bash.  Still have yet to discredit any of my GPS drops.  Bill Townsend was watching the "hot female," yet attempts to discredit my record.  He didn't start following my attempt till after Harper's Ferry.  Was told false accusations by the leaders about not announcing my attempt, even though I had multiple times.  Spot clearly stated my device was broken and I still followed all the rules.  Really think I spent thousands of dollars just to fake it.  It's quite sad all the negativity you guys stirred up.    Bills Open report is quite flawed... Keep your eyes peeled and pay attention if you are going to bash... The Appalachian Trail is the top dog for a speed record. Perhaps ya pay more attention to them... Jus joined for the Arizona Trail speed record and thought it was about time to weigh in.  Keep your ? open this time.  Bill Townsend, Kathryn Miles, Reed Zinger

Hey Dan, good to hear from you.  I'm not sure what your beef is here.  Just Bill spent a ton of time looking at what you did, and I think very fairly concluded that it was simply inconclusive.  I don't see bashing or attempts to discredit, only an attempt to find out what you actually did since your report and SPOT data were inconsistent at times.  Meanwhile, we completely acknowledge your effort at face value, and list you as a previous holder of the self-supported FKT on the AT.  Anyway, best of luck on the AZT!  I look forward to following.