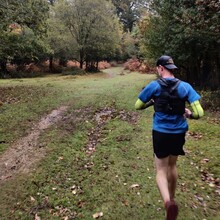 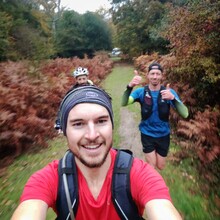 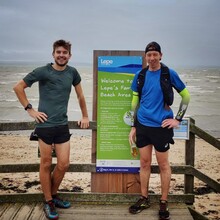 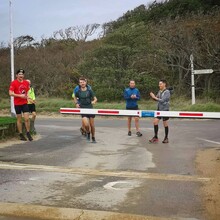 After planning the route and having the idea for a number of years, it was great to finally give this a go, and attempt out first Ultra Distance.

We met early and were dropped off at The Bat & Ball car park in Breamore and shortly after we set off on route. We were initially supported by our Friend Ben on bicycle a great runner but unfortunately injured and not able to join us for the full distance, other runners had also planned to join us but they also suffered with injuries prior to the day, but we would meet them later on, on route.

There was what felt like no more than a mile of tarmac roads and then we hit the forest. And even on this dreary day the forest did not disappoint it was beautiful all the way through.

We made a quick stop to our support van and ditched coats and took in the outstanding view from Godshill towards Amberwood Inclosure and went on our way descending the valley.

At Holly Hatch Inclosure we encountered our first group of pigs out for parsonage (eating the acorns). Then it was out towards Milksham and under the tunnel to cross under the A31 and then a welcomed long fast downhill section before making our first schedule stop at Bolderwood Deer Sanctuary. We had a banana etc and topped up the supplies had a 15 min break before we headed off on leg 2.

Leg 2: Now leg 2 should have been the short easy one, but some how we managed to find ourselves in a time contiuam some where North West of Brockenhurst, we stumbled upon a stream lost our bearings slightly and some how ended back up in exactly the same crossing point. And then it wasn't too long before we hit our 2nd pit stop behind the Balmer Lawn hotel. Here we took on much more food and I changed my wet socks which were starting to blister and away we went for our longest and final leg, something like 22K left to complete at this point. It was quite a cold wet stop and a few aches were starting to show not helped by the cold.

Leg 3: Our friend Ben got off his bike at this point and joined us on the run, as did another running buddy Mark. The 4 of us now running helped even out the pace a little and we ran on. It was at about Hawkhill inclosure where we showed first signs of some aches and pains, we stopped for a stretch out at Ranswood and were joined on route by another running buddy SImon. At this point we hit a little bit of tarmac heading towards Hatchet Pond, before coming back off road and heading down to the beautiful village of Beaulieu. On Leaving Beaulieu there was a fairly steady hill out and at this point my right side was deciding to seize up and I showed signs of a struggle up that hill, but at the top; Horah another running buddy Jack! We made an impromptu stop at Moonhills car park where we saw the van and took on board final refreshments and headed out for the final 12K.....this was now tough! we were seizing up but we carried on with one foot in front of the other. It was a hilly old section until we hit Darkwater car park and then the hills relaxed and we hit the 50K point, but still had some distance to go.

The support of the guys around us at this point was fantastic and they really pushed us along, soon one of the guys said, this is the last field to cross and at that point I took a big gulp and could of cried like a wounded school boy, it hit me, this is it we're gonna bloody well do it !! And the feeling at this point was fantastic, we emerged from the final path and we could see the sea and our final destination at Lepe beach. This was one of my proudest moments Callum and I were about to do it, two mere cross country 10K runners were about to finish an ultra....and we did! The guys clapped us in our, Kim (my wife), Beth (Callum's other half), Ben's dad Steve and our other running buddies Danii and Jo were all there and we had a celebratory beer courtesy of Danii.

What a brilliant day!!! Awesome!! Cheers Callum (The Boi) and all the Guys and supported and saw us in!!