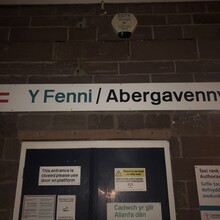 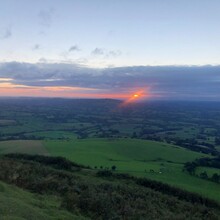 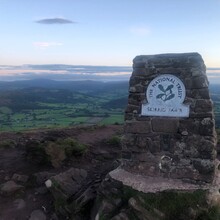 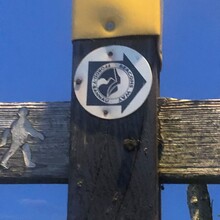 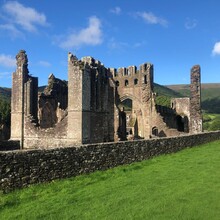 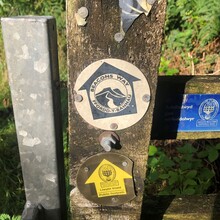 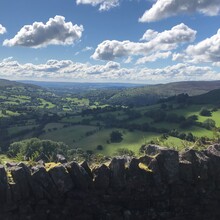 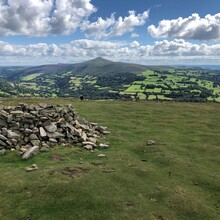 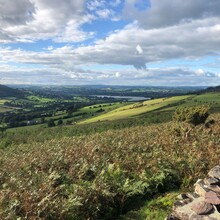 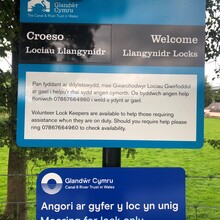 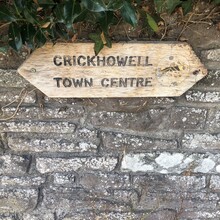 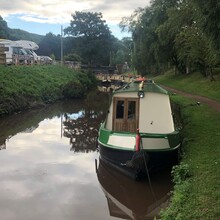 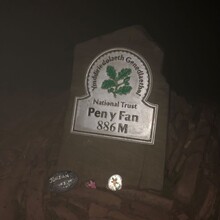 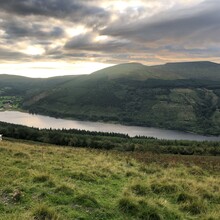 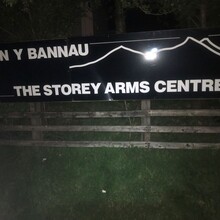 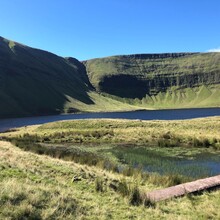 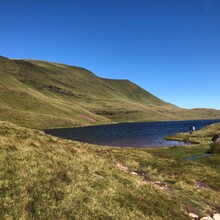 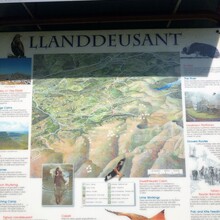 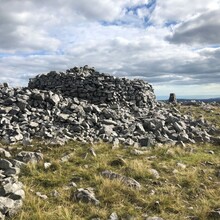 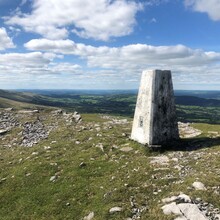 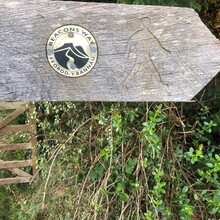 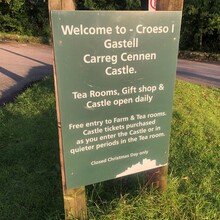 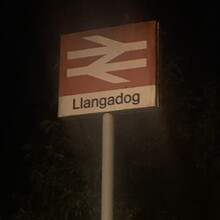 Started at Abergavenny train station just before 5am on Saturday 29th August 2020. The plan was to do the route self-supported so had pretty much all of my fuel in my pack. Felt pretty good for the first leg, perhaps a bit too good and pushed a bit hard. Nothing significant to discuss other than a pretty nice fall down a mud slope at the very end of the leg! Highlight of the leg was most definitely being at the summit of the Skirrid mountain for sunrise. Arrived at Llanthony Priory feeling good (if not muddy).

Quick wash and refill of the water bottles at a river in the valley before climbing up on to the next ridge. This was quite a push but it flattened out nicely and there was a long runnable descent afterwards before again going up on to the next ridge. Coming off this ridge I encountered the first diversion because of a collapsed bridge which meant that I had to resort to the map and find my way down to Llanbedr (South) instead of following the beacons way in a northbound direction. I re-joined the beacons way at the top of Table Mountain (the site of an Iron Age? Hill Fort) before descending down to the village of Crickhowell. I lost the line at this point and ended up fighting through some bracken and climbing over dry stone walls. Made use of some shops in Crickhowell to restock on the fluids (and an ice lolly sure hit the spot).

Still feeling good pushed on and made my way back up on to the ridge but instead of hitting the summit, the route contoured around Pen Cerrig Calch. This was a consistent feature of the beacons way and whilst it meant that I was able to miss some of the elevation, it did mean that the track was for the most part, soaking wet and muddy where the rainwater flows down from the mountain tops. Heading down I again lost the track and ended up wrestling my way through thick bracken for quite some time. I noticed that the older, dried up bracken was giving off dust and believe that I took in a good few lung fulls of the stuff. I would pay the price for this later on! Out of the bracken I headed down to Cwmdu (which I was told has it's own spring). I was able to fill my water bottles up with some tap water before heading back in an upwards direction. The views from the next ridge were amazing and offered sight of the beautiful Llangorse lake. Then followed a long descent to Bwlch before reaching the next destination of Llangynidr.

Stocked up fluids in a shop in Llangynidr and made use of their benches to take a look at the hotspots on my feet. Not looking too bad but a change of socks was in order. Quickly had a bite to eat (fruit and nuts, banana chips and cliff bar) before starting the most difficult leg of the route. After this, there would be no more shops that I could make use of. The route initially took me along the beautiful Brecon-Monmouthsire Canal before heading up towards Tor-y-Foel. It was around about here that my breathing started to struggle. Not too bad but noticeable. Skirted around Tor-y-Foel through more mud bath before dropping down onto a forestry track above Talybont reservoir. I was able to make good pace along here before heading up the steep climb to Craig Fan Ddu. It was now starting to get dark so was time to don the head torch and get some warmer clothes ready. Navigation was easy enough in the night but the terrain was tricky and the combination of mud, peat bog and tufts meant that my speed dropped considerably. Headed along the ridge to the peak of Fan-y-Big before descending steeply to the 'gap' and heading up towards the highest mountain in Southern Britain - Pen-Y-Fan and the halfway point of the Beacons Way. Long descent to the car park where I had a quick bite (dry pasta), filled up in a nearby river and headed on to the next leg.

I was able to make good pace along the Taff Trail before slowing down significantly in a boggy field. Once out of this it was time to head up again and the route went up through the beautiful Craig-Cerrig-Gleisiad nature reserve. It was still pitch black at this point but the stars sure did look amazing. It was at this point my breathing became noticeably difficult and heading uphill I needed to stop every few strides to catch my breath - not good. I eventually got to the summit of Fan Llia (although I had no idea at the time) but once again lost the track coming off here and for a good few miles had to navigate and wade through marsh, bog and rushes. It was going to be a sloowww night! Eventually got down to the main road and skirted around the next peak past some historic roman camps before finding a spot next to a river at sunrise to give the feet some more, much needed TLC. Quick bite and headed up once more before eventually descending to the next stop.

The route took me around the back of Craig-y-Nos country park and I stopped at a river to refill the water bottles before making my way up to Llyn Fan Fawr (Lake). This section seemed to go on forever and I was again struggling with my breathing and the soaking wet terrain. The lake did however look stunningly beautiful before I skirted around to the other lake (Llyn Fan Fach) and then started the very long descent to Llanddeusant. The last mile or two were a struggle between the heat, tiredness starting to set in and blisters.

Topped the water bottles up with some tap water, had a quick bite and took care of the feet and headed off. Felt much better after that. Had recently walked this leg so knew what to expect (not sure that was a good or bad thing). Nothing significant to report about this leg other than the limited access to water as the route was mainly along ridges and I did not pass any rivers. This meant that at one point I needed to make use of a pond. Used my buff as a makeshift filter and dropped two purifying tablets but feel that my stomach still paid the price for this a few days later! Chest issues ongoing, I was keen to get this leg finished. After all, I had read that the last leg was the easiest of the lot!

River refill, few mouthfulls of pasta and some blister care and I was off. I was keen to make good pace on this leg and started well. The problem was that any time I increased the effort (either going uphill or faster) I was struggling to breathe. True to the description, this leg was relatively straightforward with only a few super steep uphill sections. navigation got tricky right at the very end when I encountered another diversion coming down off the last ridge. This meant that I had to skirt around and bypass the hill fort to Llangadog instead of cutting down through it to Bethlehem. The last mile or two felt like they lasted forever but what a relief to get to Llangadog train station. It wasn't long before the dry robe was on and I was fast asleep in the passenger seat of the car. What a journey!

Overall, I enjoyed this attempt and there were times where it felt like a genuine adventure. I was a little disappointed by my time but after reflecting on this, I don't think that I could have given anymore. I do however think that a good few hours could quite easily be taken off during periods of drier weather. I wish the best of luck to anyone else who has a go at this route. The Brecon Beacons is a special place!