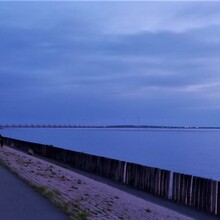 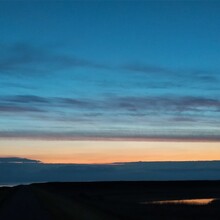 The run was supported by the boundless energy of Erik Kemper who joined a large section during the first night (circa 47 kilometers) and who ran a half marathon/ circa 20 kilometers with me during the second night. Despite wind and hail the weather was overall very good. The sunrise around the magnificent Delta Works was really gorgeous. The national park provides breathtaking views and follows the coastal line predominantly.

The run starts at the train station in Kruinigen.  I also ran to the Goes train station (and back) as described in the booklet (Wandelen rondom het Nationaal Park Oosterschelde NIVON,2003). According to the original GPX and the NIVON booklet you should follow the dyke at Colijnsplaat. We had to deviate here as it is at the time of writing a protected nature reserve since birds/ protected species are seeking shelter. According to local news it will be closed for the next several months. The whole area was closed by large gates and running through it would be illegal. Hence, we took the parallel route. The original GPX /route description turned out to be slightly outdated so when we reached a protected nature reserve or closed area with barbed wire, we took the parallel route too (there was no other option, this was the case on the route to Zierikzee). According to the booklet the lenght of the original route is 196,2 kilometers but due to the abovementioned reasons we ended up running 200 kilometers in total.

At Zijpe there is a ferry but only in the tourist season. Since we could not utilize it and since the attempt was supported we used Erik's car. The +- 15 minutes drive took us to the most southern point of the first loop (Sint- Philipsland). The whole loop is 20,8 kilometers. If you start at St-Philipsland you can complete the whole loop in one go. If you would go unsupported and take the ferry in the tourist season you would have to run one leg twice (adding respectively 11,9 or 8,9 kilometer to the total distance, depending on which leg you run twice). In self-supported fashion a taxi would be a good option.

The final loop was straight-forward: I ran from Sint-Phillipsland to the Kleine Dijk according to the route instructions. The total loop is 48,2 kilometers and the finish of the trail is again at the Kleine dijk (where the last loop starts).

Overall, we had a great adventure in what I would call an unique ecosystem. It is a nice mixture of impressive coastal lines combined with historical towns. Along the route there are plenty of spots to refuel. Do keep in mind that most shops and grocery stores are closed on sunday when you go self-supported.

In case you would like to run this route but find the logistics difficult, please feel free to reach out. I would be happy to share my experiences!

It is a route I can really recommend.