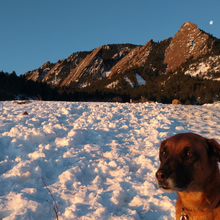 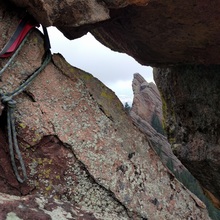 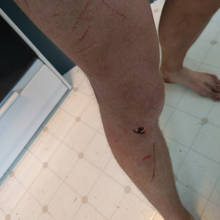 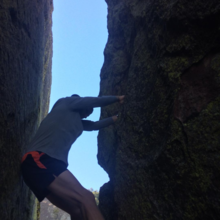 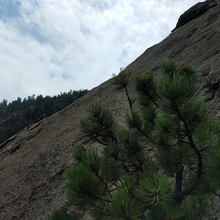 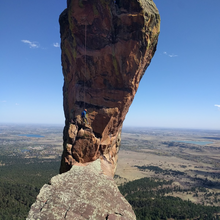 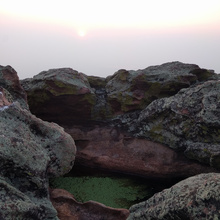 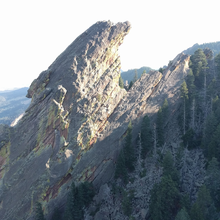 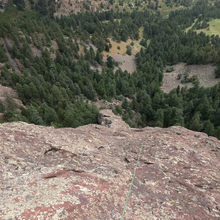 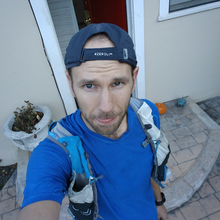 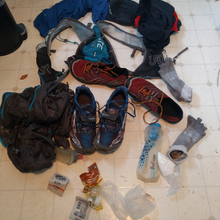 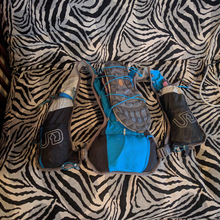 No one even tried to beat Briggs' time for the TTIAD until Darren Smith announced his attempt for 11/3/2017. Smith was successful, beating Briggs' time by just 3 minutes, but including running all the way back to Chautauqua, rather than Briggs' finish at Eldorado Springs, adding probably 30-35 min. to the effort. Smith's track and report are on his Strava. His outing was completely unsupported and he didn't use a rope, with the bold innovation of downclimbing the hardest route, Friday's Folly, which certainly saves many minutes.  Darren also ran back to the starting point at Chautauqua, rather than finishing at Eldorado Springs, as everyone else had done.

Darren's complete report is here, which we have copied below: https://docs.google.com/document/d/1l9wZ2NPOkRaqrYCDwIFxmJ5o9cM9CUiuxXuvRQO9Eug/edit

All of the pics from his report are included here, but they are not all from this outing.

My splits and comparison to Bill Brigg’s time from 2001: https://docs.google.com/spreadsheets/d/1VyHyyP-ewj7IF03Dfw-rvF6-2D0c6-eDK9xOgD1jd8Y/edit#gid=0

For a really awesome detailed writeup of what this is (with great pictures), check out Ali and Danny’s trip report: https://www.14ers.com/php14ers/tripreport.php?trip=16668 They did it a little different, ascending all climbs instead of just ascending or descending. I actually ran into them while they were doing it a couple years ago, they were just starting the north face of the matron, so my partner and I went and climbed the east face instead.

The roach top 10 in a day is a linkup of the Gerry Roach’s personal top 10 climbs in the flatirons from his guide book published quite some time ago. Bill Briggs set the FKT in 2001 with a time of 6:31. He did it solo but brought a rope for the rappels. I somehow got the idea that I could just practice the hard parts so thoroughly that I could downclimb them and skip the rope allowing me to run more and beat the time. This would also make it reasonable to run back to Chautauqua making it a loop and truly unsupported. So this is an FKT by the original standard, but is strictly >30 minutes longer in nature too.

I scouted and climbed for the first time several of the top 10 routes this summer and practiced hard parts repeatedly. Many people think downclimbing is more difficult than regular climbing, but I think that is only because you can’t see with your feet (and we don’t practice it) so it is harder to tell where to go, but when you have a section memorized this isn’t an issue and I actually find many of the climbs easier to do in reverse. This fall I brushed up on the climbs and bushwhacks and made a go at it before we got too much snow.

The rules I followed were start and finish at Chautauqua (this is actually the ideal trailhead to roundtrip from so I wouldn’t require that from future attempts, but I would discourage the trailhead slightly uphill from Chautauqua in the cottages which would save a couple minutes). No support (i.e water/food/gear stash), tag all summits at their highest point with a hand (for maiden and matron this meant the furthest west high point because it is slightly higher). Didn’t cut first flatiron approach trail.

I took the Friday off to reduce the chance of running into other parties (decent chance of that happening on a weekend at the Maiden or Matron). It was a cold morning about 32 degrees, an inversion meant it was actually warmer up higher, but I waited till 9:55 to start for it to warm up a bit so I could travel without much extra warmth gear. It was still cold until a bit up the first flatiron when it then became warm and I started sweating more than I wanted to. I was in my resoled merrell trail glove 3’s from the beginning but also carrying Altra King MT’s for their deep lugs for the really slippery hilly pine needle bushwhacks. I climbed the third by the standard route (which isn’t my normal way actually) and felt really in the zone. Took my time downclimbing Friday’s folly, this saved time since it got me off of the third and checked off a top 10. I switched shoes on my way towards Green Mountain Pinnacle, a bushwhack that is pretty heinous, at least the way I go (I’ve explored about 5 different ways/times), went above the ironing boards and Willie B. On the way I seem to have gotten some pretty deep cuts from just charging through the dense bush areas that I encountered.

The chimney in GMP went quickly, I took my time getting back into the chimney and took a direct way down, staying near the west opening. Now that that was out of the way and I was still too warm I shed the shirt and put the pack back on. I then ran down to hammerhead and descended below the 4th flatiron to rejoin the Royal Arch trail. From near the royal arch it is directly south and about the same elevation to Stairway to Heaven, I estimated this was about the same total elevation regain as going above the 5th flatiron like Briggs, but I am more familiar with these trails so did that. Climbed to the top of Stairway to Heaven and then descend the entire ridge to skunk canyon stream. This went faster than expected, I felt slow and conservative but being in the zone meant just didn’t waste little bits of time here and there pondering what the best way would have been (like I normally am when scouting).

I filled up a waterbottle with a built in filter in the stream and proceeded to make the steep bushwhack hike up to the backporch. My inner thighs started to cramp pretty badly on this (it was actually debilitating and painful when I took a high of a step, very painful and they would seize completely if I lifted my leg too high). This would be a problem the rest of the day for me whenever things got too steep to run but not steep enough to climb. I didn’t really know what to do about problems like this and it was pretty concerning as I still had over 4 hours to go. But I improvised some hiking poles with sticks and that proved to be helpful. Later I found that it was only hiking that really bothered them and always improvised said poles.

Backporch went quickly despite feeling slow and conservative, downclimbing, the hardest parts weren’t the cruxes but remembering where exactly to go in the easy but dirtier areas (I switched to my resoled shoes for this and switched back after). The run over to Pellaea was nice, but I knew I should fill my bottle again at Bear creek, but there was a fence near it and I didn’t want to deal with it. Climbed Pellaea after switching shoes again, downclimbed the route most of the way to escape. It actually would be possible to jump onto the nearby flatiron that is separated by a large chimney. However this would be too scary to actually do (without practicing with a rope first) and even though it would save >5 minutes as you could then run down west of the flatirons, it would be a decent drop and quite an impact on your legs which could have consequences later on a long effort.

I ran to water trough below the Maiden and refilled there only a bit thirsty. Worked my way up to the Fatiron on another tricky bushwhack, but one that always seemed to spit me out at the right spot by luck (I’m still amazed that Briggs onsighted this climb in his effort and presumably the approach). I climbed this route while refilling my bottle again in a pothole at the top of the first piece. Very short bushwhack over to the maiden which I changed shoes for. Mentally I was tired and forgot all about time while climbing this, just taking it slow. One of my favorite flatirons, would have been nice to hang around at the awesome summit, but immediately turned around to descend. Going through the crux in reverse was actually no worse than up.

Heading to the Matron was a lot of bushwhacking and there are several choices on how to best do this, I still don’t know the “best” way. But went a way that I was reasonably happy with which involved steep descending on cushy pine needles, I couldn’t go the same way twice but was lucky with how clean this line ended up being.

At the matron I was looking forward to being done with the technical bits, my mind was tired, being constantly vigilant to errors is exhausting. I changed shoes for this as well, and when I got back down was very happy to be done with all the scrambling. However I was behind the pace I thought I needed to make it back to Chautauqua in under 6:31 (by about 10 minutes). I had planned to run to South Mesa Trailhead in this scenario so I could still set the FKT. But at this point I just really wanted to run and make it a loop and was willing not set the 1 way FKT but be content with a loop FKT. I wasn’t super tired since I had been limited by leg cramps and carefulness in technical areas. So I set out to return to Chautauqua unsure of how that would go, if my legs start cramping worse. Normally running was fine, but they even started to cramp running uphill sometimes, I really had to focus on using glutes rather than hamstrings. Hiking was 100% out of question even though normally it would have been more efficient in some of the uphills. I ran as hard as I could and didn’t waste any time refilling to get more water (I was out). When I got near the blue bell shelter (more familiar territory to me), I knew I had no more uphill and had at least a minute to spare.