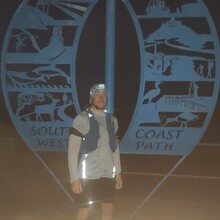 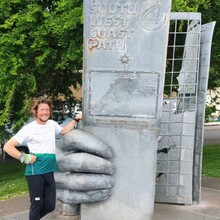 What an adventure. Having never tried anything over 48 hours this was always going to be learning on our feet.

I set off at 4.12am on Thursday 12th May from South Haven Point. My crew - Keely and Philly - had said they would stick with me until the end. They had no crewing experience but they learnt super fast and soon developed into the leanest meanest crewing team around. They are now inundated with crewing requests. Not sure they realised quite how much work it was going to be but guys - you were absolutely awesome, there is no way this would have been achieved without you. Philly even got out and did a few decent pacing shifts.

I followed a gpx route which was the master work of Richard York. He spent many a long evening getting together as much info on the swcp current diversions and approved routes as possible. The gpx was amazing. Because of its accuracy it had to be split into 5 different gpx files. This meant that when the end of a gpx was reached the activity was saved and a new activity started. On the ground acorns were followed over the gpx so the diversions on the gpx track are a signed swcp diversion or the original swcp that was open. All of these deviations from the gpx file were photographed on the ground.

I had my Garmin watch on me recording activity at all times. We also had a tracker which was carried mainly my myself, sometimes by a pacer taking the bag for a bit.

Ran solo. Covered 136km. Had to take a long (approx. 10km) diversion around Lulworth ranges as there was firing. This diversion was approved by an FKT member the night before.

Joined by my main pacer (and top class ultra runner) Mark Darbyshire. Covered 126km. Could not ask anymore out of a pacer than what Mark provides, thanks mate. We had to get driven around both Exmouth and Dartmouth ferries.

Again paced by Mark until he headed home in the evening. Covered 112km. Driven around the Erme river crossing. Steve joined late in the evening for superb pacing around Plymouth to catch the last ferry with seconds to spare.

Paced most of the day by Steve. Covered 82km. Hit by heavy rain and a twisted ankle was a big worry.

Steve on pacing again. Covered 94km. Had to be driven around Falmouth ferry. The ankle was really slowing things down. Remote medical advice provided by Jenny eased the pain. Realised that the only way to get any sort of mileage in was to up the hours on the trail each day.

Steve pacing on and off until Penzance and his train home. Rich appeared like by magic in a big rain storm and got things moving again. Tom and Freya joined for much appreciated crewing assistance and a bit of pacing. Covered 69km in pain.

Solo running with ankle pain moved up to shin. Finally hit some flat ground and made a few miles up. Joined for the evening section again by Rich, our magically appearing much appreciated pacer. Covered 83km.

Solo running. Much flatter. Covered 95km. Time to pull things together a bit.

Return of Mark for pacing duties. Bullied me over some big climbs. Covered 79km.

All out to the finish. Had a hours sleep at the end of day 9. Set off 1am on Saturday to run through to Sunday lunchtime. Couple of 5 min trail sleeps, and two 20 min van sleeps (the second to allow the watch to charge enough to make it to the finish). Joined by my wife Sharlene for much of Saturday which made running seem easy, perfect pacing. Covered 172km.

Finished at Minehead Sunday at 12.36 to an amazing welcome from Sharlene and my daughters Niamh and Leila.

Everyone involved in this has been awesome. The trails are steep and long but amazing. If you're thinking of giving it a go, stop thinking and do it.

The only disappointment was Keely and Philly turning down the suggestion of an out and back!