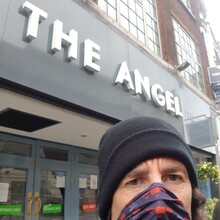 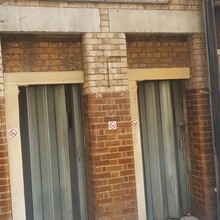 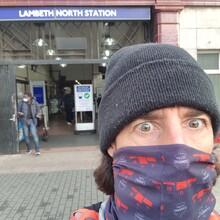 I was planning on doing a run outside of London but at the very last minute I saw this new FKT posted by Mark and Sophie.

It is such a brilliant and fun FKT. Basic idea from Mark is that you stand in front of the 26 places on the London Monopoly Board and start at GO! which is Lambeth North Station.

I did some research - which again I loved.

Mark had created a route which would offer a slightly more scenic way of seeing all 26 places and he even added in some that weren't on there!

For mine I decided that I would be totally uninventive and I would just see if I could link them by the quickest route - even if that meant doing the entire Euston Rd.

Mark had also coolly name-checked the legend Richard McChesney (http://richardwalkslondon.com/walking-the-monopoly-board/). If you love FKTs then you really should follow Richard - when he does them he does them BIG. For Richard's London Monopoly route he actually visited them in the order that they appear on the board. My route was approx 14 miles, Mark/Sophie's 16 and Richards 54.

I really hope Richard adds his version and his original time to the FKT platform because it really is a completely different (and in my opinion so much more respect is due) FKT.

For my run I went wrong on the first road. We are still in COVID London which means that most streets are deserted but it also means that delivery bikers come out of nowhere are mow you down and TFL are digging up as many roads as they can.

The route follows some of the Walkway and it's most enjoyable in the middle section. I did it unsupported. There are a couple of shops open if you need them.

The final Euston Rd section was awful and I had completely lost all will.

Summary. This is a cool new FKT. Before you know it the speedsters will bring this down to something over the hour!!! If that happens and you just want to do a fun route - then go back to Marks.

If you want to shave a little bit more distance off mine but obviously keep to all 26 + GO! then look at the Whitechapel to Liverpool St bit as I seemed to loop too far and then the route to Fleet St seemed long. I lost Vine St and had to stop and reboot my phone to find out where the cheeky little back street off Regents actually was. It really is the oddest one of the 26.