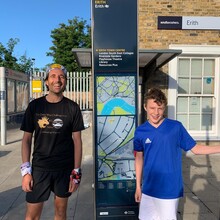 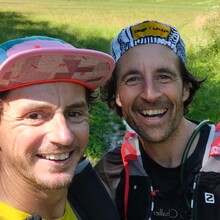 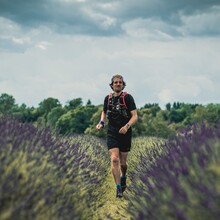 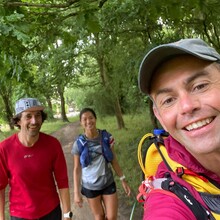 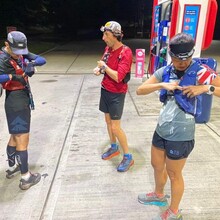 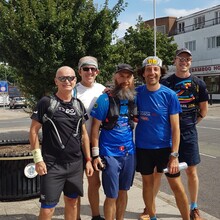 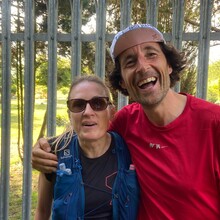 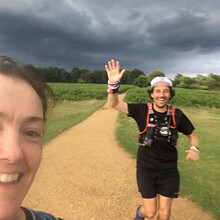 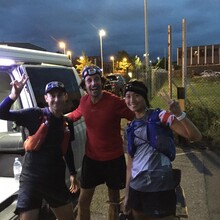 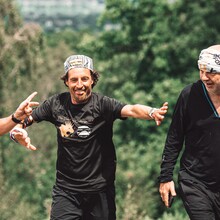 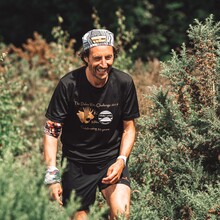 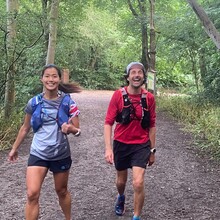 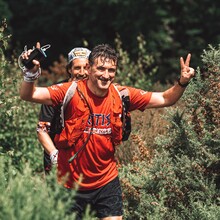 The natural beauty that surrounds this city is mind-blowing. Nothing better shows off this beauty than running the 155 miles of the Loop

Couldn't find any quicker listing than Colin Dear's 4 day success. So decided to set a personal challenge of sub 36 hours (in keeping with Spartathlon)

Put out a few private WhatsApp messages to see if any local ultra buddies would be up for some buddy-running/crewing and managed to get the best of the best to cover off practically the entire route.

Starting 07:00am Thursday 2nd July from Erith in Kent with Ed, I was met by close ultra buddy Bryn Jones for four sections - Bryn made the cake of the fkt and we also got soaked on about three occasions (which led to major blistering on Day 2) and then legend James Poole for three sections (whilst he carted his 2 foot long camera - big thanks to James for his world-class pictures I've included here) with James we also ran through the most inspiring sections including Mayfield Lavender Farm and Happey Valley (high recommend). Met next by Anna Brown (training for this years Marathon des Sables) who helped me navigate around the awkward Hatton Cross sections ( few diversions around here!) through and over the Thames (only time!) at Kingston Bridge and onto Hatton Cross (for first of two planned crew stops) route with Anna through Bushey Park was unforgettable - seeing stags leaping - bathed in sunshine whilst all around us were the most menacing black skies.

Crew stop was organised by friend and angel Paula Bedford who had brought my night team of Alison Walker & Stephen Macintosh. Stephen's amazing wife Julianna had made me the most delicious noodle food and Paula a welcome cup of tea. After some phone drama (broken from earlier rain damage) and change of night clothes we were off.

Night section: We had been contacted by Spencer Milberry who had kindly offered to meet us (if we needed) for a supply drop. I knew that Stephen could only commit to a couple of hours before needing to head home. Plan was always for Alison to complete the entire night and to keep the 36 hour challenge on track. Being the ultimate superstar that he is, Stephen put in a double shift, provided us with some awesome uplifting tunes and importantly helped keep a really good pace going. Around South Oxhey we met another stranger come best-new-friend - Rob - local guy who had seen the fkt on "twitter"! Rob stayed with us for an hour but what an important intervention, The route around here was gnarly - forests with tiny trails, loads of ways to go wrong - basically a jungle in night time. Having Rob lead us through this was such a blessing. Spencer put in a through the night shift to keep us in vital water and with Alison's hardcore (much loved and needed) approach to "eat this - no eat this now - drink this......" we made it through unscathed....did I mention being attacked by horses spooked by our head-torches

After 24 hours of eating gels and bars and drinking electrolytes my stomach was beginning to reject the idea of more and there was a genuine dip in energy. A sub (or at least low) 30 hr finish had been on the cards but was beginning to look less likely. Alison said goodbye and I was met by Antonio (easily the nicest guy on the planet) who had a breakfast feast for me. Eating real food was such a joy but it took my body a long while to process and for the mojo to return. Paula resurfaced to join for some happy smiley miles and more and more people (who had read about the fkt from someone else's Day 1 post) appeared to run or wish me well. After 130 miles we were met by the final run-buddies Martin Denham and Martin Longhurst - two great friends of mine and importantly two local boys from this part of deepest -darkest Essex (you have been warned!) We had some slow sections with horrid fields and forest trails that had no love of the loop. With the finish fever kicking in we also had some of the quickest (felt that way!) continuous run sections (as there are more road miles here than anywhere else on the loop) - both Martin's cranked it up for the final three miles along the industrial River Thames into Purfleet.

Wow! Cannot thank all my friends, ultra-runners and well-wishers enough. This was true epic fkt-territory. This is no easy fkt - millions of small tips I could give anyone who wants to have a go. Please message me as I will love to help you get the most out of it