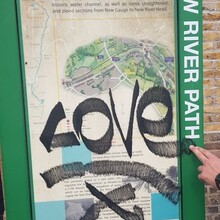 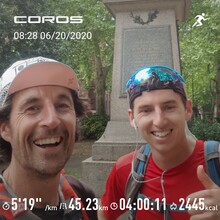 Contacted previous FKT holder Sam Anderson to see if he was able to come and join us. In the end it was David Bone with Mathew Haworth (New Zealand)

New River starts next to the Lea Valley and goes through a mile of boggy trenchfoot fields before it follows a beautiful river route for a few miles. At this end of the route there are wide landscapes of countryside and it's heavenly. Watch out because the closer it gets to dense London the river is neglected and there are a crazy amount of gates and styles. Problem is that several of these are actually padlocked (probably a follow on to the COVID situation)

The path is extremely well sign posted but it does also switch either side of the river many many times - so you do need to keep your wits to make sure that you are on the right side. We found ourselves faced with an underpass that was at least 1 ft deep with stinky water - felt like there was no other choice that to go through it. There are a few sections where you go along the river certain that it's the wrong way because it is so overgrown and the path has loads of dumped stuff on it. So follow the gpx closely.

The route is mostly pretty and mostly runable but there are a couple of major A roads that you have to get across. We got stuck waiting a long minute or so to get across one. Be careful not to play frogger!

As you get closer to central London the actual river is often (way below the ground) not to be found and you are mostly on roads. Coming into the last three miles you are supposed to go through a series of very small thin parks. Challenge here is that they are all "one-way" at the moment due to Coronavirus - So you have to find a way to run parallel with them - some have those horrible gates to slow you down.

We knew that we were close time wise. Plan was always to go sub 4 hours and we were pretty certain that we would make up. However there are some real traffic full roads near the finish and in the end we were lucky to actual beat the FKT. Finishing in 4 hours and 11 seconds

We will be back