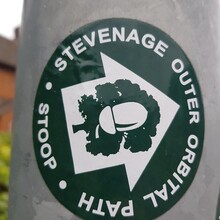 As it is a loop you can start from anywhere. I parked up in Woolmer Green village near the Red Lion for free and started the run and Bridge Road.

Having done a lot of routes the overwhelming feeling of STOOP was like a never-ending romp through a farmers field - rutted - some corn gaps - mostly dry. The route has flat bits but is mostly rolling - nothing too steep. There are sections where there are literally tens of gates every KM and probably too many sections that throw you onto quite busy roads.

I enjoyed it but it probably would be quite a way down my list of favourite FKT routes - the scenery isn't as stunning as others nearby - there is nothing of interest on the route and although this was an unsupported attempt there literally was nowhere to get any supplies - you would almost certainly have to go off route and possibly into Stevenage. On the plus side the STOOP is amazingly well sign-posted - that said there is such a high number of very small turns that going wrong is pretty much guaranteed.