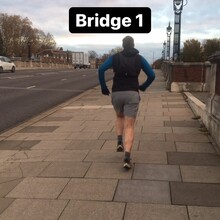 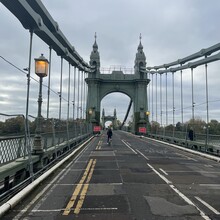 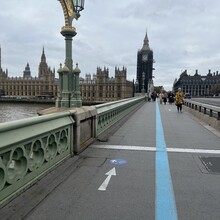 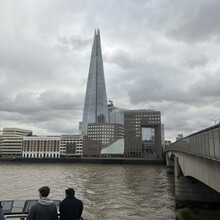 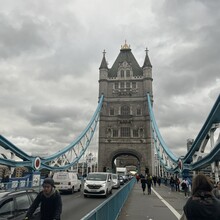 Having postponed running this route twice (once for lockdown and once for injury), I finally managed to find a date and a willing support crew!

I ran this supported FKT attempt on Saturday 13/11/21, starting at 7.30am from Hampton Court Station. My support crew consisted of my fiancée cycling alongside as part water-bearer and part photographer!

The weather was overcast with a mild temperature of 9 degrees - so running in shorts and a single layer. I did wear a running vest with water and gels for the periods of the route where we were separated.

Good progress was made along the first half of the route with longer stretches and clear footpaths between the bridges allowing for consistent steady running. The bridges were great milestones and felt good to be ticking off another one as I went. Stand out favourite bridges were Albert and Millennium, while Twickenham was disappointingly ugly.

The last 5k or so were tough, with much more frequent bridges (the stairs up and down to them were killer), but being able to see Tower Bridge as you come round the South Bank definitely spurred me on.

As I got further into the route, the footpaths got progressively busier with it significantly hampering speed as I got closer to Tower Bridge. Definitely something I had not fully considered when planning my day/timings!

Overall, a memorable route with some great sights of London! My time was slower than I'd hoped but given I was stopping every bridge to take photos and the sheer number of people out it was understandable!