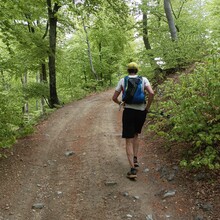 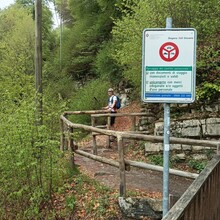 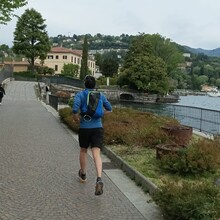 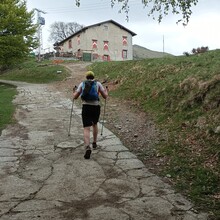 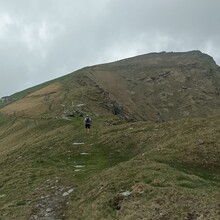 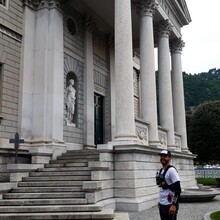 We started on a cloudy day. Maybe not the bast wheater to be out there but we had a free day from our jobs and so...

Parked at the train station and walk down to the scenic Tempio Voltiano, touched the stones and started the stroll.

First 4km on the lakeside are beatiful are fast and we arrive at the base of the Bisbino ascent in 20 minutes. The trail is blocked for road works, after a flood ruined it the past summer, but is reachable through a shortcut on the left of the road signs.

We started digging hard on the old steep stone trail up to Monte Bisbino. We reached the top after 1h and a half, took a picture and went back on our footstep and then left to proceed on the route. Here starts a hilly jeep road where is it possible to make up some speed. The day was cold and rainy enough to not let us have problem with the water but here is it possible to make a stop, passing through Rifugio Murelli and Rifugio Bugone. We didn't stop to adhere to the chosen unsupported style, but for the next trip we will stop, maybe for a polenta.

We ran fast up and down until Erbonne. We reached the village in 3h15'. Here we crossed the border and started the akwardly steep trail up to Monte Generoso. The legs were a bit sore but we managed to keep on, one step after another, until the top, where we touched the metal structure in 4h16'11".

We took a stop, eat some Haribo crocodiles, and run down to the Mendrisio train station under am hail storm. Fortunately, once there, after a 5 minutes wait, we took the train that brought us back to the car in Como in 15 minutes.