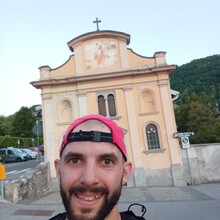 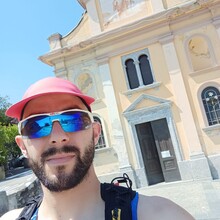 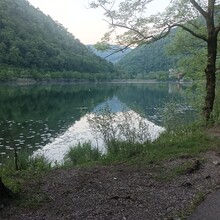 Started on May 11th, one of the first hot day of spring. Wheater was sunny with a light fresh breeze from the lakes.

Started from Eupilio church at 1.30 pm and got on the ridge below a beating sun. Must keep the eyes open as the trail cross the main road on multiple points.

I arrived on Cornizzolo top in 1h and suddenly proceed along the ridge to Corno Birone and Monte Rai. Then down on the first descent to Acqua del Foo to refill the bottles.
Up again to Forcella dei Corni in 2h15'.
From here I let my leg spin on the long tarmac descent to Valbrona, where again is possible to refill at the public fountain.

From here the troubles begin. The climb up to Monte Megna follow a old, dirty trail (number 28) very difficult to find in some spot. There are painted signs but is easy to get lost, as also the GPX track provided is poor. The climb is super steep and I start to thought I was on some Gary Cantrell kind if a joke. Even on the descent to Crezzo the track goes back and forth on several closed trail and took a couple of off trail, no sense, hairpins.

Despite difficulties I reached Crezzo in 4 hours, loosing a lot of time and getting off schedule. From there on I started pushing myself for real on the faster part to chase the FKT. The loop here starts to be mixed between trail and tarmac, first up and then down to Barni, where there's another public fountain in the central square.

Again, the GPX track is poor following the trail parallel to the statal road, even passing in private land where the trail was blocked. I was forced to jump over an eletric fence and then climb over another gate to proceed, fortunately not seen by any angry shepherd.
I HIGHLY suggest to modify the track passing higher through Via Valmorana and Strada per Megna.
After this private land crossing I reached Alpe Megna where a sheperd dog was blocking the trail. I stopped running, put my sticks away and convinced him I wasn't a threat, still losing precious minutes.

From there on I made a bit of calculations and understood I had really to dig deep to beat the previous FKT. Fortunately I didn't have problem from there on and I was able to reach the last 2 km on tarmac in the Segrino lakeside, still in time to enjoy the sunset light and took couple of pictures.

Got back on Eupilio church in 7h11' with just few minutes of advantage but enough to set a new FKT.

Again, please fix the provided track and scout for alternatives in the Alpe Megna direction as the actual trail is unaccessible.