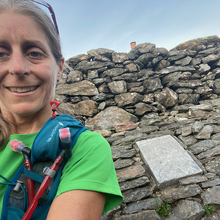 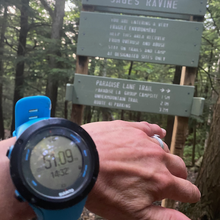 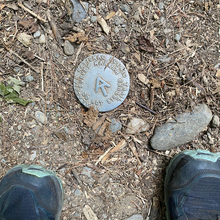 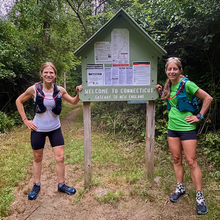 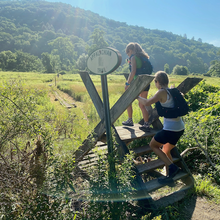 Yesterday, I ran the Appalachian Trail from the New York/Connecticut border to the Connecticut/Massachusetts border. This run started as a self-supported team effort, but my teammate stopped after 32 miles. I continued on under the supported style.

The start on the NY border is easy to find. We started at 5:26 A.M. It was a very hot day, which made this even more challenging. My partner suffered from nausea. I felt strong and was able to pick up the pace. We had placed three water caches at various points along the route as the amount and quality of stream water was weak.

One frustrating and confusing aspect of the run is the finish. There is no sign on the border between CT and MA. Please update the main Route description to include a note that for FKT purposes, the majority of the athletes finish (stop--or start their watch) at the first Sage's Ravine Sign (with the Paradise Trail sign below it). This sign is a few hundred feet north of the border on the Massachusetts side. Though you can locate the border with a GPS and/or your phone (Google Maps), but there is no guarantee of a good signal and this could vary. It's best to use the sign as a common point of reference to start/end the FKT.

Note that I took a photo of the sign and my watch at the conclusion of my run, but I was nervous about this and kept running. My time at the sign was 14h 32m. Since I didn't stop my watch, my GPS track and Strava file show that I added several miles going out and back on the MA side of the border. There are two signs (one on each side of Sage's Ravine) that indicate the MA/CT border. The AT make a right turn after the border and parallels the border for more than a mile. These signs are NOT in the right spot and if you see them and have remained on the AT, then you are well past the official end of this FKT. This is worth noting for future attempts.

Bottom line, the general consensus is that the first Sage's Ravine sign a few hundred feet past the CT/MA border on the MA side should be the trusted start/end of this Route.

Another thing to note is the discrepancy in mileage between various sources. The AT in CT has changed many times over the years. The current edition of the CFPA Walk Book lists the trail as 56.6 miles, but that is inaccurate. The CT Chapter of the Appalachian Mountain Club publishes a map that indicates 51.6 and this is much closer to the actual readings that I got and what other athletes have measured.

One thing that is nice about the Walk Book is the description of the trail which is listed here. Feel free to add this to the  main Route description.

Trail Overview: The Appalachian Trail (AT) in Connecticut is part of the fabled through-route from Springer Mountain in Georgia to Mt. Katahdin in Maine, a distance of approximately 2,200 miles. The trail was the first in the nation to be named a National Scenic Trail, so designated by an Act of the U.S. Congress passed in 1968. Most of the original route in Connecticut was blazed by Ned K. Anderson, CFPA chair of the Housatonic Valley section from 1929 to 1932, when the AT was one of the early Blue-Blazed Hiking Trails. Today the entire length of the trail is blazed white, with most side trails blazed blue. The trail is maintained by the Connecticut Chapter of the Appalachian Mountain Club.

The Connecticut section of the AT extends from Sherman at the New York state line to the brook crossing at Sage’s Ravine, just north of the Massachusetts state line at Salisbury. The trail goes up the Housatonic River Valley and twice crosses the river. The region is noted for its forested landscape, rugged rocky hills, open valleys, ravines, waterfalls, and magnificent vistas. Wildflowers abound in spring and summer, and year-round sightings of deer, turkey, and fox are not uncommon. From the mid-18th Century until the early 20th Century, the area was home to a thriving iron industry. The foundries and blast furnaces were fueled by charcoal heated to the extreme temperatures required to melt raw iron ore into molten crude, or pig iron. The charcoal was produced by itinerant colliers who chopped wood cut from the forested hills, stacked it into huge mounds, and burned and smoked it over several weeks. Remains of these hearth sites (flat circular areas) can be seen along the trail.

Several designated camping areas are available on or near the trail. Camping is allowed only at these designated locations. Camp and cook fires are prohibited along the AT throughout Connecticut. Additional AT information and detailed trail descriptions are available in the Appalachian Trail Guide to Massachusetts-Connecticut published by the Appalachian Trail Conservancy.