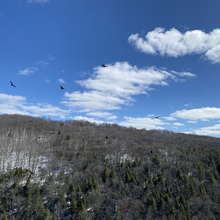 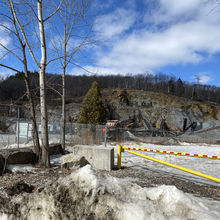 The Hancock Brook Trail is only 5 minutes from the Whitestone Cliffs Trail so I decided to run both in the same day. Since there was so much rock on the Whitestone Cliffs Trail I thought there would be a lot her too. Because of  that I decided not to wear my Nanospikes but I really could have used them as the section of trail long the brook was well trampled and doesn't get much sun so it was very icy. I ran counter clockwise mostly because I did not see the left hand turn to go up the cliff only a short way in but I was very happy I did since it was a nice gradual climb on the north side which I prefer to climb.  The south side was more steep and rutted which I like descending on. I had to stop at one of the overlooks to take a picture of a bunch of vultures floating in the sky. The parking area is a bit spooky as it is at the end of a dead end street but the woods were very pretty.