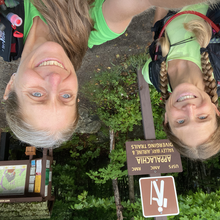 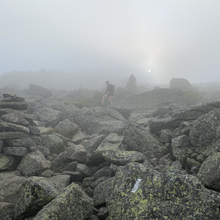 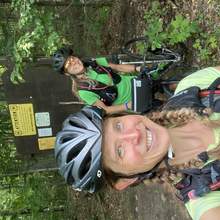 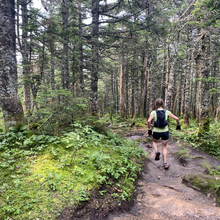 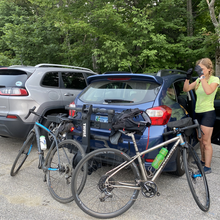 Laura and I got up at 4:15am to have the time to lock our bikes at the kiosk at the bottom of Crawford Path and make it around to Appalachia parking area before 6am. We were on our way by 5:51am and decided to head up the Airline Trail. Not sure why I had it in my mind that was the way to go that morning but once we were on it we were committed. It was a strong push up to Madison Hut which was socked in with fog. The top of Madison had wicked strong winds and poor visibly which had us pass over the summit, realize it (thankfully) right away, to turn and go back down. We took Gulfside/Airline to the top of Adams almost mistakenly taking Starlink which I remember from years past being a tricky trail. Down Low's Path connecting back to Gulfside by way of Israel Ridge Path. It was so foggy that we would call out for each other every so often to make sure we were still there. Near the top of Jefferson we almost missed the summit due to the fog but decided to retrace as I did not feel we got close enough on first pass. Mt Clay was uneventful but on the climb to the summit of Washington we got a glimpse of the Cog Rail chugging up the mountain. There were too many people standing in line at the summit of Washington to even get near it so we pushed on down to Lakes of the Cloud to fill up on water. Looking at our track right now I realize we also summited little Monroe where we could have cut back down to the Crawford Path! Lower in elevation, we were finally out of the fog when we summited Eisenhower and then Pierce. It was wet and slippery all the way down to our bikes. We had a quick change of shoes, shoved everything into our packs and were on our bikes by 1:55pm. Biking on those main roads were not fun with the tractor trailer trucks and pickup trucks wizzing by, especially on Rte 2 with a crappy shoulder. All, in all, it was a good day.