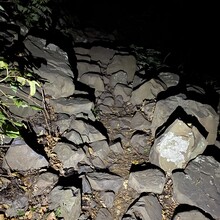 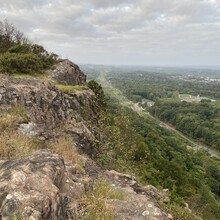 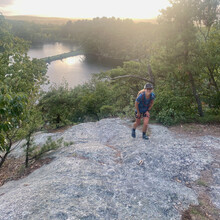 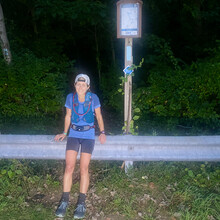 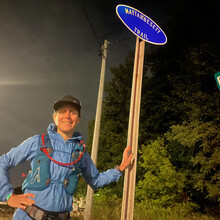 I ran the western half of the Mattabesett Trail when I completed the New England Trail a few months ago, but I had been interested in seeing the eastern half. I chose to start my run on the western end of the trail. I started my watch at 4:07am. I was in the dark for a couple hours, all alone, which was a bit spooky but soon the sun rose and I was moving along at an enjoyable pace. My husband Scott met me at about mile 9 to check on me, take my waist light and give me some more food. He dropped water at Guida's and another drop at route 68 so he could get his own adventure in. I was aiming for 7 hours to route 77 where Scott was to meet me and I arrived there just under 7 hours! I had 30 miles completed and about 30 to go. Scott barely made it there in time to provide water, food and company. We swiftly moved on. The footing on the trail is pretty much the same on both half; lots of rocks, roots, erosion and punchy up and downs. I climbed ~11,000 feet over the 60 miles but was never higher than 1,000ft! I did run into some frustration in the Rockland area where the trail had been relocated. We did not know this prior to the run and got very confused running back and forth a few times since it did not match up with the map and a group of hikers told us we were not on the Mattabesett. We eventually found a sign indicating the relocation. Of course, that added about a mile onto the trail and took away a road section (which always gives you a few fast miles). I was really hoping to finish before dark but had to dig out the lights for the last mile. I finished on River Road (the eastern end of the trail) a little after 7pm.