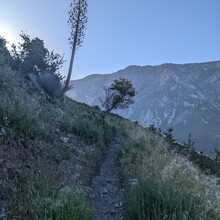 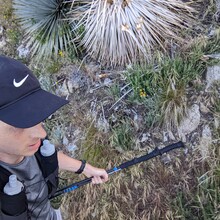 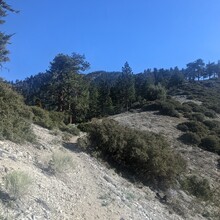 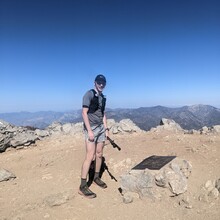 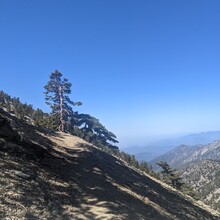 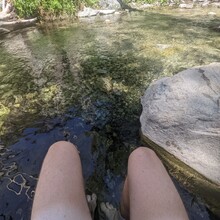 I have been waiting for the snow patches to melt on Baldy to enable a good attempt. Last weekend I did a 2:30 summit from Bear Canyon to check the snow and to test out the legs and they felt pretty good so I decided to start and see what happens. There was still a ~300ft patch near the summit to cross but it had solid footsteps to follow.

Left at 3:30am (only a solid 3 hours of sleep unfortunately which meant I was going to have to accept the higher heart rate that comes with two Venti coffees from Starbucks) to drive the 2 hours up to the Icehouse Canyon Trailhead to get a good parking spot before the typical Saturday morning convoys start arriving. Right after parking I realized my resting HR was way too high so I went for a walk and read a book for two hours for a 7:10 starting time.

Decided to walk to the Icehouse Canyon gate for a easy starting and stopping point. The first 1.5 miles downhill are a very good warmup. I managed to average 6:28 minute miles down to the village start which is fairly easy given the downhill slope. I'm always intrigued by how innocuous the Bear Canyon trail starts with a nice gradual paved section followed by a nice graded trail at 13% for the first 1000ft before punishing you with 3,500ft at 23% before returning to a manageable 11% for the final 1000ft.

Being so early in the season I had decided beforehand that I would not attempt to better the FKT time by pushing hard on the downhill as I was not confident in my muscles handing that much impact so early into training. In my opinion there is at least 20 minutes to improve on the downhill (if you want to risk it) from my time and another 10 minutes to improve if I would have went on a weekday as I spent at least 10 minutes waiting for people with headphones to make way on the Icehouse Canyon trail. Lastly there is absolutely a decent amount of time to improve upon on the climb up Bear Canyon from my time.

With that said, I pushed the steeps section with roughly 2,900ft in that hour of ascent, which was a little past my limit today as I had a pretty poor pace on the final 11% that could have been done much faster, but I was happy with a 2:19 ascent from the Village. I jogged down the backbone taking breaks to refuel and drink but kept a pace that I was comfortable at. People really give weird concerned looks at runners on the Backbone but I've never felt unsafe doing 10 minute miles on it when the snow was gone.

At the notch I switched my two 0.5L softbottles in the front of my vest that were empty for two additional ones I had in the back of my Sense Pro 10 vest and took another 90 calorie SIS gel. I had taken two on the ascent and it was a shock to realize I had only packed three. Power-hiking the additional climbs I attempted to hold 2500ft/hr but the best I could muster was around 1500. Luckily they are short and not that steep so even a slower pace doesn't hurt too bad.  (700ft, then a 600ft then a 300ft climb)

The descent down Icehouse was fun, I tried to hold around 10 minute miles on the semi-technical descent but they ended up being 12 minute miles between waiting for people. I was walking the fine line between wanting to go fast and respecting people on their hike up Icehouse but please don't wear headphones that block out all noise or only wear one. So many people were completely oblivious to the line of faster hikers stuck behind them and it becomes dangerous.

Touched the gate at 5:12:46 and walked down to my car, drove down the road and put my feet in the river. I had been daydreaming about sitting in it but realized I am way too much of a wimp to sit in that cold of water.

* Regular old running shorts and a t-shirt, plenty warm for a 40 degree summit at that pace and a Nike running hat