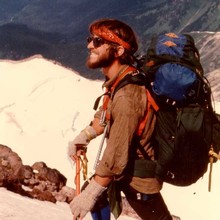 Doug McKeever is a professor of geology, ultrarunner and mountain guide from Bellingham Washington. He emailed his Glacier Peak trip report in September 2008:

Although not as well known or popular as Mt. Adams, Rainier, Hood, or Baker, Glacier Peak is another beautiful volcano in the Washington Cascades. To this day this is one of my all-time favorite climbs, one that I repeat occasionally. The picture [below] is of me on Frostbite Ridge way back in 1978, just a scruffy mountain man! On that trip we camped on the summit and came down via the Sitkum Glacier on the west side.

On a perfect August day in 1998, I did a solo, unsupported "speed" climb of Glacier Peak via the White Chuck River Trail and Sitkum Glacier route in 7 hours and 54 minutes, car to summit to car (about 24 miles r.t. and 8,800' climb). I wish I could have just one race sometime where everything clicks like it did that day! Yes, I did use crampons and an ice axe but as I was solo of course didn't use traditional roped travel on the Sitkum Glacier. However, this trip occurred just two days after doing the Sitkum Glacier route in fairly standard three day fashion, and the route conditions and weather were as perfect as could be, so I don't feel like I compromised safety unnecessarily. An interesting point is that Dan O'Brien, Olympic decathlon champion in 1996, had climbed to the summit just a few days earlier.

Sean O'Rourke noted some changes to the best route:

Note that the White Chuck Road/Trail was destroyed by flooding in 2003, and the Forest Service doesn't intend to repair it: www.fs.usda.gov/recarea/mbs/recarea/?recid=17820

Gerdine Ridge from the North Sauk trailhead now seems to be the most direct route; I'm not sure how much slower it is than the old Sitkum route.