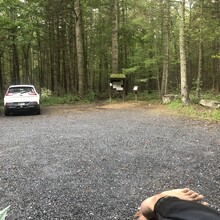 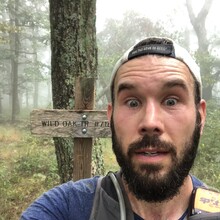 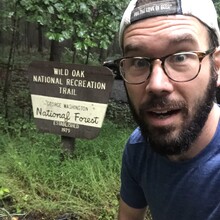 Began at the standard trailhead off of FR-95. It was drizzling at the start and some mix of fog, cloud or rain the whole time. All the rocks and leaves had plenty of moisture to offer.

Setting off, I had my SJ 2.0 pack with food (Lara bars, Skratch energy chews) and 30oz of water/Skratch. Was able to move pretty well on the initial climb, up near the first peak in ~1:37, and down to the creek in ~2:14. I had to abandon my eyeglasses on the descent due to persistent condensation, so that slowed descents from then on (20/20 vision is nice). Took 7-8 minutes to filter water and ended up with about 70oz (too much by about 20oz).

Could feel the extra weight climbing toward Big Bald and later the final peak, but was able to move pretty well on the flats and downs. The first half of the final descent (what looks like old fire roads) was very muddy and the rocky latter half was a bit slippery, but so it goes! A cool, dry day would definitely be favorable.

There's definitely room under this one, but glad to get an Unsupported effort on the board.

NB: this effort is dedicated to my mother-in-law Rebecca Cleeves. She would have been 70 today and was always glued to the SPOT website during my adventures. The SPOT tracker only picked up three points today, but hoping she got a much better view.