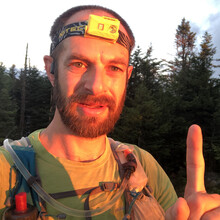 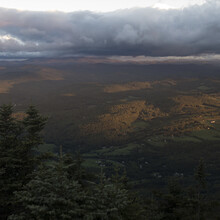 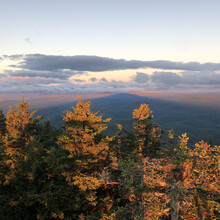 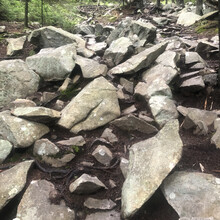 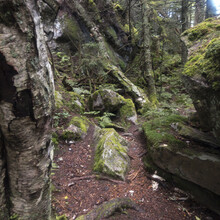 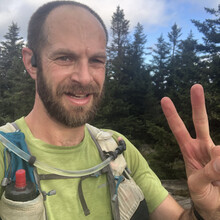 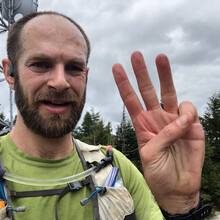 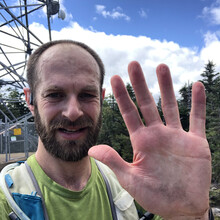 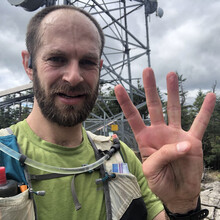 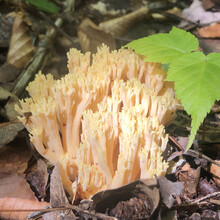 This is the year of Ascutney for me. Before Covid even happened, I had decided that I would climb Mt. Ascutney one hundred times this year. (I'm at 64 so far.) I love this mountain, and it's just over 3 miles from my house to the summit, and slightly less from the nearest trailheads. When Covid hit, it became obvious that I would be spending a lot of time on this mountain this year.

I had wanted to do this hike/run for a while now, and after doing the Ascutney Triple Loop FKT (which was subsequently broken by my friend Joffrey...I'm coming back for that record dude!) which goes up or down each of the 6 routes up the mountain, I thought this "all trails" challenge would be another great one. Why does the loop have 6 routes and this one have just 5? It's because in this challenge I'm not using the auto road, just each of the five trails.

First, this was not an attempt to go as fast as I possibly could. I'm training for something else, and this was to be a nice long training run with a lot of vert. I wasn't even going for an FKT, but I decided if I could do it at a pace faster than 3mph, it would be good enough to set a bar for the route and I would submit it as an FKT.

I left a bit after 5am on Sunday, August 30th. I went up the Bicentennial Trail, my favorite because it's the only trail that averages just over 1,000ft/mi vertical gain and it's the shortest. (And BTW, if anybody wants to go for my personal record of 54 mins total for up and down, go for it!) It hit the summit just at sunrise and hiked up the tower to get a glimpse of the sun between the horizon and the cloud layer.

Given that I wasn't going for time at this point, I took my time to get photos, stopped at the hanglider launch and from there I went down the Weathersfield Trail, but due to the major rains the day before, it was very slick and I had to work my way down very gingerly over the rooty and rocky technical terrain. By the time I hit the trailhead I was still averaging over 24 mins/mi. At this point I thought doing sub-20 min miles was out of the question. Then I hiked up quickly and gained time, hitting my second summit 2:48 after starting.

The day was beautiful. It was a little breezy at top with the low when I started around 55 and the high just around 65, with a mix of sun and clouds. Really couldn't ask for anything better.

Then it was down the long Futures Trail which was also still slick at this point and I again had to work my way down carefully, although parts were drying up nicely. When I got to the campground, I realized that I may just have a chance at doing sub-20 mins/mi for the day. I went to fill up my water bladder at the campground spigot and couldn't get the damn thing closed. I wasted almost ten minutes down there and was getting pretty pissed, but luckily this was the last time I would need to fill it up. Then I hoofed it to top, getting back up to the summit around 5 hours 25 minutes after starting.

I was feeling really good and the summit was getting crowded so immediately turned around and headed down. Logically I would have done the Windsor Trail next to keep my counter-clockwise trail completion going, but I also know how much I had the Brownsville Trail descent AND that there's no water on Brownsville Trail this time of year, so I decided to do that first before I was exhausted and out of water, leaving the Windsor Trail which is less Rooty, and has multiple water sources in the bottom half, for the last one.
I saw some friends on the way down (and again on the way back up) and was able to keep my hiking pace pretty consistent. The ground had finally (mostly) dried out and I made good time. When I hit the summit, I was just under 3mph pace and knew I had it in the bag. I made decent time down the Windsor Trail, used my BeFree bottle for one final fill up on the way up and when I hit the summit, I happened to run into my wife and kids who had driven up the road and hiked the trails at the top. (I don't consider this support, as we didn't plan to meet and it was totally unexpected that I saw them there.)

Finally, I headed down the Bicentennial Trail and hit the bottom at exactly 9 hours and 30 minutes for a total of 29 miles and 12,630 feet of total gain.
I'm submitting this as an unsupported FKT, as I carried everything I needed for the day with me, and just filled up water along the way.

Given that I was doing about an 85% effort, the trails were wet and I had to descend slowly and carefully for the first two descents, and I stopped multiple times to take iPhone photos, and talk with people, I think a top notch effort for me would be go sub 8:30 and I think even sub 8 is possible. For a top level runner/hiker sub-7 is probably possible.

I'd like to go for this again at some point this year, as I know I can go faster, but at least it's out there and hopefully others will be interested in checking this out.
I've never felt better about living where I do during this pandemic, and I'm so lucky to live next to such a beautiful and challenging mountain. The terrain on this lives up to most trails you'll find in the Whites or along the Long Trail. Heck, this route averaged 435 feet of gain and loss each mile, which is difficult to find anywhere.

Now, onto the next adventure.